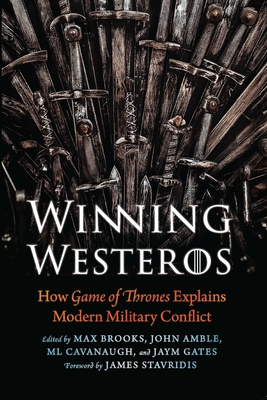 
In Stock—Click for Locations
Set in the fictitious world of Westeros, the hit television series Game of Thrones chronicles the bitter and violent struggle between the realm’s noble dynasties for control of the Seven Kingdoms. But this beloved fantasy drama has just as much to say about the successful strategies and real-life warfare waged in our own time and place. Winning Westeros brings together more than thirty of today’s top military and strategic experts, including generals and admirals, policy advisors, counterinsurgency tacticians, science fiction and fantasy writers, and ground-level military officers, to explain the strategy and art of war by way of the Game of Thrones saga. Each chapter provides a relatable, outside‑the‑box way to simplify and clarify the complexities of modern military conflict. A book as captivating and enthralling as Game of Thrones itself, Winning Westeros gives fans of the show and aspiring military minds alike an inspiring and entertaining means of understanding the many facets of modern warfare.


Max Brooks is a writer, public speaker, and senior fellow at the Modern War Institute at West Point, and nonresident senior fellow at the Atlantic Council. He is the author of World War Z: An Oral History of the Zombie War and The Harlem Hellfighters, among other works. Brooks, and the other coeditors of this book, edited Strategy Strikes Back: How Star Wars Explains Modern Military Conflict (Potomac Books, 2018).

John Amble is the editorial director at the Modern War Institute and a military intelligence officer in the U.S. Army Reserve.

ML Cavanaugh is a senior fellow at the Modern War Institute and a U.S. Army strategist with global experience.


“Fans of Game of Thrones interested in the insights of modern strategic thinkers will enjoy this book. . . . Illuminating readers’ blind spots is where fiction can truly help strategic thinkers get outside the box, and this is where Winning Westeros has the biggest impact.”—Jessica Dawson, Res Militaris