Dr. NO: The Discovery That Led to a Nobel Prize and Viagra (Hardcover) 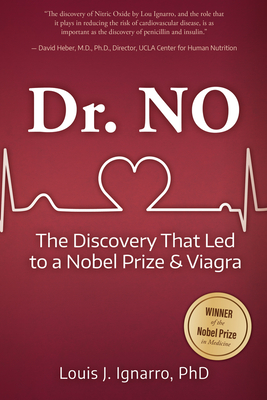 Dr. NO: The Discovery That Led to a Nobel Prize and Viagra (Hardcover)


Not On Our Shelves—Ships in 1-5 Days
In 1998, Dr. Louis J. Ignarro was awarded a rare and coveted Nobel Prize for his groundbreaking discovery of nitric oxide (NO) and its many critically important biological actions. But his work goes far beyond the development of Viagra. It has never been more urgently relevant to the world than it is today, as clinical trials are underway that involve using inhaled NO to treat patients suffering from COVID-19.

Most Nobel laureate books have focused on the science. But in this fascinating and timely memoir, Dr. Ignarro opens up and shares intimate details about himself and his journey, his amazing accomplishments and heartbreaking setbacks, both in science and in life. This isn’t just a scientist’s story, it’s a quintessentially American story. Only in America could the child of uneducated Italian immigrants start out a struggling student barely able to speak English, and go on to win the Nobel Prize.

The son of Italian immigrants, Nobel Prize winner Dr. Louis J. Ignarro was educated at Columbia College, the University of Minnesota, and the National Institutes of Health. In addition to doing his groundbreaking research on the unique signaling molecule nitric oxide (NO), he has taught at Tulane Medical Center and the University of California Los Angeles. During his long, distinguished career, in addition to being a Nobel laureate, he has won many prestigious awards in the United States as well as abroad, including the Distinguished Scientist Award from the American Heart Association, the Roussel Uclaf Prize in France, and honors from the National Academy of Sciences, the National Academy of Medicine, and the American Academy of Arts and Sciences, as well as winning eleven consecutive Apple Teaching Awards that are voted on only by students. His biotech company has developed several popular nutritional supplements that continue to be sold through Herbalife, and he has a large, well-established personal fan base of 250,000+ highly engaged social media followers. As a highly sought-after speaker, he draws huge audiences sometimes exceeding 13,500.
"The discovery of Nitric Oxide by Lou Ignarro, and the role that it plays in reducing the risk of cardiovascular disease, is as important as the discovery of penicillin and insulin." —David Heber, M.D., Ph.D., Director, UCLA Center for Human Nutrition

“Lou Ignarro’s transfixing, riveting, true story takes you through a Horatio Alger tale as the son of immigrant parents in Brooklyn to a Nobel Prize in Medicine in Stockholm. The story reveals an uncanny parallel between Lou’s life and that of Alfred Nobel himself, for whom the Prize is named – both experimenting with the chemistry of 'nitro' compounds – in the case of Nobel, harnessing these compounds as the explosive dynamite, and for Ignarro discovering nitroglycerin-like compounds’ function in the human body as vasodilators. The one difference – Lou doesn’t blow up his laboratory!” —Stuart Lipton, MD, PhD, Professor of Neuroscience, Scripps Clinic, La Jolla, California