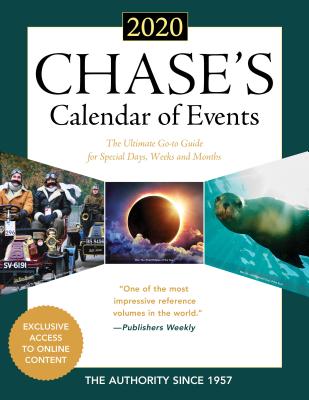 By Editors of Chase's


Special Order—Subject to Availability
Find out what's going on any day of the year, anywhere across the globe The world's date book since 1957, Chase's is the definitive, authoritative, day-by-day resource of what the world is celebrating and commemorating. From national days to celebrity birthdays, from historical anniversaries to astronomical phenomena, from award ceremonies and sporting events to religious festivals and carnivals, Chase's is the must-have reference used by experts and professionals--a one-stop shop with 12,500 entries for everything that is happening now or is worth remembering from the past. Completely updated for 2020, Chase's also features extensive appendices as well as a companion website that puts the power of Chase's at the user's fingertips. 2020--a leap year--is packed with special events and observances, including -National days and public holidays of every nation on Earth -The total solar eclipse -The 100th anniversary of US women's suffrage (19th Amendment passed) -The 75th anniversary of the end of WWII and the atomic bombings of Hiroshima and Nagasaki -The 250th birth anniversary of Ludwig van Beethoven -The 100th birth anniversary of Ray Bradbury -The 50th anniversary of the Beatles' break up -The Tokyo Olympic Games -Scores of new special days, weeks and months, such as International Go-Kart Week, National Goat Yoga Month or National Catch and Release Day -Birthdays of new world leaders, office holders, and breakout stars -And much more All from the reference book that Publishers Weekly calls one of the most impressive reference volumes in the world.
Chase's Calendar of Events is produced by an in-house team of editors and researchers based in Chicago, IL. Chase's was first published on December 4, 1957, by brothers William and Harrison Chase.