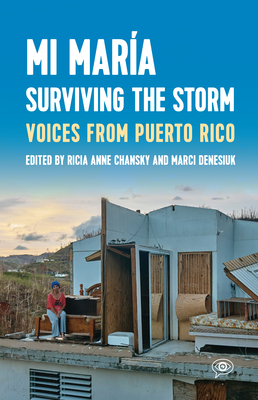 When Hurricane Mar a made landfall in Puerto Rico in September 2017, it left no part of the archipelago unscathed. The hurricane triggered floods and mudslides, washed out roads, destroyed tens of thousands of homes, farms, and businesses, caused the largest blackout in US history, knocked out communications, led to widespread food, drinking water, and gasoline shortages, and caused thousands of deaths.

The seventeen oral histories collected in Mi Mar a: Surviving the Storm share stories of surviving the storm and its long aftermath as people waited for relief and aid that rarely arrived. Zaira and her husband floated on a patched air mattress for sixteen hours while floodwaters rose around them. The road washed out in front of Emmanuel as he desperately tried to drive his pregnant wife who had begun labor to the hospital. Luis and his father anxiously counted the days that the dialysis clinic remained closed and lifesaving treatment was unavailable, while Miliana's mother was sent home from the hospital --undiagnosed-- only to fall critically ill in her own home.

Weaving together long-form oral histories and shorter testimonios, the book offers a multivocal peoples' history of disaster that fosters a greater understanding of the failures of governmental disaster response and the correlating perseverance of the people impacted by these failures, highlighting the colonial relationship between Puerto Rico and the United States. Ultimately, the ways in which these oral histories demonstrate the strength of community response to disaster in Puerto Rico are pertinent to other parts of the world that are being impacted by our current climate emergency.