Loomered: How I Became the Most Banned Woman in the World (Hardcover) 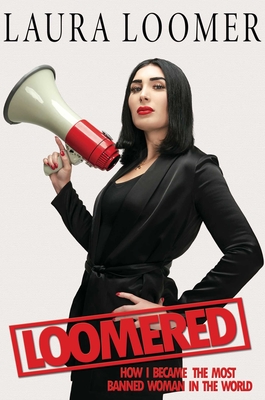 Loomered: How I Became the Most Banned Woman in the World (Hardcover)


Not On Our Shelves—Ships in 1-5 Days
Laura Loomer is the most banned woman in America.

An investigative journalist, activist, and truth-teller who has earned many powerful enemies in Silicon Valley and the media, Loomer has been banned from Facebook, Twitter, Instagram, Uber, Lyft, Uber Eats, PayPal, Venmo, GoFundMe, Periscope, Medium, and TeeSpring…so far. Loomer works tirelessly for Americans banned from essential online services for having the wrong political opinions. In addition to filing lawsuits against the companies that have wrongfully ostracized and defamed her, she is running for Congress in Florida’s 21st District. This is her story.
Laura Loomer, twenty-eight, is the “most banned woman in the world.” She is also a Jewish Conservative investigative journalist, an activist, and a pathological truth-teller. The latter are responsible for the former, because her courageous reporting and activism have earned her many powerful enemies in Silicon Valley and the press.

Originally from Tucson, Arizona, Laura began her journalism career working as an undercover journalist for Project Veritas from 2015–2017. Loomer’s investigations have uncovered fraud and corruption within the Hillary Clinton campaign, Islamic terrorism, the cover up of the Las Vegas Shooting, flaws and loopholes within the U.S. immigration system, anti-Semitism, and widespread voter fraud throughout the U.S. Loomer has traveled all around the world for her investigations, and she is mostly known for her Guerrilla-style journalism. She has become notorious for door-stepping Democrat politicians and celebrities with rapid-fire and artfully tactless questions, broadcasting the encounters online to a gleeful live audience. Public figures unfortunate enough to be on the receiving end of her ambush interviews are said to have been “Loomered,” a term now in relatively common usage and hopefully someday in the Merriam-Webster dictionary.

In political retaliation for exposing cherished Establishment figures, Loomer has been banned from Facebook, Twitter, Instagram, Uber, Lyft, Uber Eats, PayPal, Venmo, CashApp, GoFundMe, Medium.com, Periscope, YouTube, Stripe, Teespring, and Chase Bank—so far. She isn’t taking it lying down. Despite being canceled, Loomer has continued to fight for free speech and First Amendment rights for all Americans. This book is her refusal to be silenced and a warning to all Americans about what is to come if Big Tech tyranny and social media censorship are not immediately defeated in America.

In addition to filing numerous lawsuits against the Big Tech giants, Loomer ran for U.S. Congress in 2020 in Florida’s 21st District, home to President Donald J. Trump, where she lives with an English Bulldog whose name is also “Loomer."