The Physics of Climate Change (Hardcover) 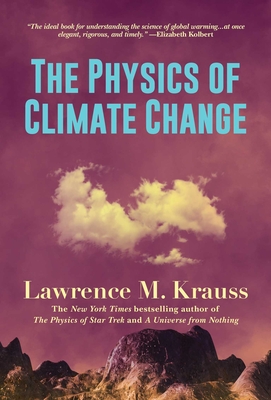 The Physics of Climate Change (Hardcover)


Not On Our Shelves—Ships in 1-5 Days
The first book to briefly and clearly present the science of climate change in a way that is accessible to laypeople, providing the perspective needed to understand and assess the foundations and predictions of climate change.

“Brilliant and fundamental, this is the necessary book about our prime global emergency. Here you’ll find the facts, the processes, the physics of our complex and changing climate, but delivered with eloquence and urgency. Lawrence Krauss writes with a clarity that transcends mere politics. Prose and poetry were never better bedfellows.” —Ian McEwan, Booker Prize-winning author of Solar and Machines Like Me

“Lawrence Krauss has written the ideal book for anyone interested in understanding the science of global warming. It is at once elegant, rigorous, and timely.”—Elizabeth Kolbert, staff writer, The New Yorker, and Pulitzer prize-winning author of The Sixth Extinction

“A brief, brilliant, and charming summary of what physicists know about climate change and how they learned it.” —Sheldon Glashow, Nobel Laureate in Physics, Metcalf Distinguished Professor Emeritus, Boston University

“The distinguished scientist Lawrence Krauss turns his penetrating gaze on the most pressing existential threat facing our world: climate change. It is brimming with information lucidly analysed. Such hope as there is lies in science, and a physicist of Dr. Krauss’s imaginative versatility is unusually qualified to offer it.” —Richard Dawkins, author of The Blind Watchmaker and Science in the Soul

“Lucid and gripping, this study of the most severe challenge humans have ever faced leads the reader from the basic physics of climate change to recognition of the damage that humans have already caused and on to the prospects that lie ahead if we do not change course soon.” —Noam Chomsky, Laureate Professor, University of Arizona, author of Internationalism or Extinction?

“Lawrence Krauss tells the story of climate change with erudition, urgency, and passion. It is our great good luck that one of our most brilliant scientists is also such a gifted writer. This book will change the way we think about the future.” —Jennifer Finney Boylan, author of Good Boy and She’s Not There

“Everything on climate change that I’ve seen is either dumbed down and bossy or written for other climate scientists. I’ve been looking for a book that can let me, a layperson, understand the science. This book does just what I was looking for. It is important.” —Penn Jillette, Magician, author of Presto! and God, No!

“The renowned physicist Lawrence Krauss makes the science behind one of the most important issues of our time accessible to all.” —Richard C. J. Somerville, Distinguished Professor Emeritus, Scripps Institution of Oceanography, University of California, San Diego

“Lawrence Krauss is a fine physicist, a talented writer, and a scientist deeply engaged with public affairs. His book deserves wide readership. The book’s eloquent exposition of the science and the threats should enlighten all readers and motivate them to an urgent concern about our planet’s future.” —Lord Martin Rees, Astronomer Royal, former president of the Royal Society, author of On the Future: Prospects for Humanity
Lawrence M. Krauss is an internationally known theoretical physicist and the author of hundreds of articles and numerous popular books including NYT bestsellers, The Physics of Star Trek and A Universe from Nothing. He received his PhD from MIT and then moved to the Harvard Society of Fellows. Following eight years as a professor at Yale University, he was appointed as a full professor with an endowed chair while still in his thirties. He has made significant contributions to our understanding of the origin and evolution of the Universe and has received numerous national and international awards for his research and writing. He is currently President of The Origins Project Foundation and host of The Origins Podcast with Lawrence Krauss. Between 2006 and 2018, he was Chair of the Board of Sponsors of the Bulletin of the Atomic Scientists. He appears regularly on radio, television, and film.