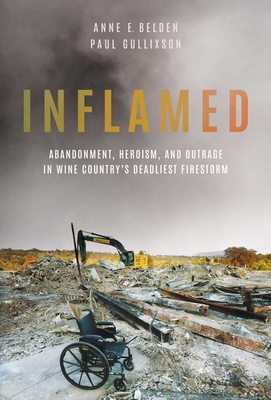 
Coming Soon—Pre-Order Now
The dramatic story of hundreds of senior citizens left in the path of a ferocious firestorm and what the quest for accountability reveals about the increasing risks to our most vulnerable population.

Just after midnight on October 9, 2017, as one of the nation’s deadliest and most destructive firestorms swept over California’s Wine Country, hundreds of elderly residents from two posh senior living facilities were caught in its path. The frailest were blind, in wheelchairs, or diagnosed with dementia, and their community quickly transformed from a palatial complex that pledged to care for them to one that threatened to entomb them. The rescue of the final 105 seniors left behind on an inflamed hillside depended not on employees, but strangers whose lives intersected in a riveting tale of terror and heroism. Headlines blamed caregivers for abandonment and neglect, but the truth proved far more complex—leading to a battle for accountability that stretched from the courtroom to the state legislature, and ultimately, to the ballot box.

Inflamed: Abandonment, Heroism, and Outrage in Wine Country’s Deadliest Firestorm is the gripping and emotional narrative detailing what happened to these seniors, employees, and rescuers before, during, and after the Tubbs Fire decimated portions of Santa Rosa, including Oakmont Senior Living Villa Capri and part of Varenna at Fountaingrove. Anne Belden and Paul Gullixson are professional journalists and Sonoma County residents who spent three years recording each phase of the disaster in agonizing detail—from the botched evacuation and its excruciating aftermath to the investigations, lawsuits, and breakdowns that followed. They tell this harrowing story with a veracity and compassion only achieved by experienced reporters with local roots. Their narrative revisits the horrors of 2017 but also asks the reader to look to the future and consider how their community’s most vulnerable will fare as ten thousand Baby Boomers retire each day, the for-profit assisted living industry rapidly expands, and the climate becomes more volatile. If this travesty can happen at high-end senior living complexes, it can happen anywhere.
Anne Belden runs the journalism program and advises the newsroom at Santa Rosa Junior College. During the 2017 Wine Country fires, she drove students into devastated fire zones to report on the disaster. Their work won numerous state and national awards and saw global syndication; Anne now instructs on how to cover wildfires. Before teaching, she spent eighteen years as a journalist, working as a reporter and editor on the San Francisco Peninsula where her news, feature, and investigative articles were recognized by the California Newspaper Publishers Association, San Francisco Peninsula Press Club, and Parenting Publications of America. Anne holds a bachelor’s degree in mass communication from UCLA and a master’s degree in media studies from Stanford University. She lives with her family on a Sebastopol ridgeline, from where she’s had clear view of six past fires and has only had to evacuate once.

Paul Gullixson is communications manager for Sonoma County. He previously worked for thirty-seven years as a journalist, including as editorial director for The Press Democrat in Santa Rosa, where he played key roles in several team awards, including the 2018 Pulitzer Prize awarded to The Press Democrat for coverage of the October 2017 fires. He has also received numerous individual awards from the California Newspaper Publishers Association and the San Francisco Peninsula Press Club and is a past recipient of the New York Times Co. Chairman’s Award for editorial writing. Paul taught journalism for five years at Sonoma State University, serving as faculty adviser for the student newspaper, and later worked as associate vice president of strategic communications for the university. He lives with his family in east Santa Rosa where they have been repeatedly evacuated due to wildfires…but is thankful that their home has been spared so far.