How to Live a Happily Ever Afterlife: Stories of Trapped Souls and How Not to Become One (Paperback) 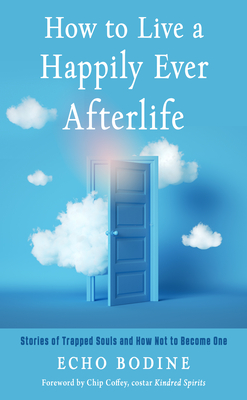 How to Live a Happily Ever Afterlife: Stories of Trapped Souls and How Not to Become One (Paperback)


Not On Our Shelves—Ships in 1-5 Days
“What happens after we die? What is the Afterlife really like? From her own perspective, Echo shares intimate insights that she has garnered from Spirit about life after death. This book is compelling, thought-provoking, and comforting.”—Chip Coffey, costar, Kindred Spirits

"Echo Bodine is the most genuine psychic I have ever worked with..." —Dennis William Hauck, author of Haunted Places

Well-known psychic and ghost hunter, Echo Bodine, started seeing spirits as a young girl and has been helping to set them free for decades. Most of these spirits have one thing in common—unfinished business from their lives that leaves them restless, unable to let go and move on. Some souls choose to remain closer to this dimension rather than move into the light when they die.

Here, Bodine shares her experiences and compelling investigations that have led her to see the issues from a spirit's living time on Earth which have left them restless and unable to cross over. Each story is accompanied by an exercise that will help the reader avoid the fate of a trapped, angry, or unprepared soul.

Some reasons spirits haven't gone through the light include:
How To Live a Happily Ever Afterlife is an eye-opening look at spirits—at what compels and holds them—and what you can do to avoid the same fate.

Echo Bodine is known internationally for her work as a spiritual healer and writer. She has appeared on numerous national television shows, including Sally Jesse Raphael and NBC's Later Today. She is the author of a number of books, including Hands That Heal, Echoes of the Soul, Relax, Little Book of Ghost Stories, and A Still Small Voice. She lives in Minnesota.