Say What?: Irreverent Essays of a Bemused Atheist (Paperback) 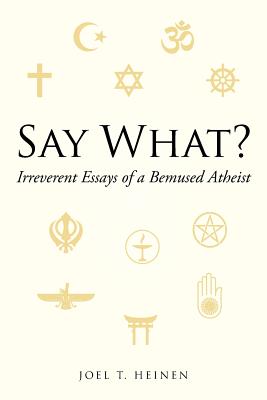 Say What?: Irreverent Essays of a Bemused Atheist (Paperback)


Not On Our Shelves—Ships in 1-5 Days
Religion is a funny thing. Most people believe in one or another and assert that theirs is true. Many religious people also assert that every other religion believed in by anyone else ranges from completely false to highly suspect. There are religions that believe in many gods, others that believe in one god, and there are even religions that preach no gods. There are also sects within religions that disavow other sects within the same religion. There are religions that are extinct and new religions formed all the time. The reformation of older religions is also ongoing. What all religions seem to have in common are (1) supernatural beliefs that others don't believe and (2) absolutely no real demonstrable evidence that can be repeated and shown to others in support of any of their supernatural beliefs. If you think about it, religion truly is a funny thing in every sense of that word. Many people define their religion to be the all-encompassing paradigm of their existence that causes them to do completely virtuous, altruistic things. Yet religion also causes others, who are equally or even more pious, to commit mass murder. And both have been true for many religions throughout history. This volume takes a broad and satirical look at religions writ large, mainly to question. It's aimed largely at atheists and those on the fence, but theists may be encouraged to read it too and question for themselves. How did you acquire religion? Why? What do you believe? Why? Why not believe other equally implausible things that others do believe? This volume is just a light hearted attempt to ask. C'est tout.