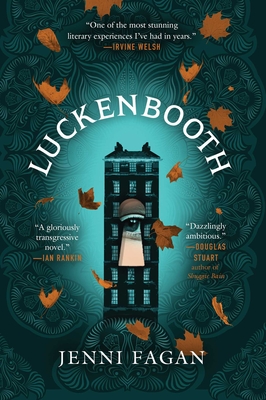 
On Our Shelves Now at:
A bold, haunting, and startlingly unique novel about the secrets we leave behind and the places that hold them long after we are gone, a “quintessential novel of Edinburgh at its darkest.” (Irvine Welsh)

There are stories tucked away on every floor of 10 Luckenbooth Close.

1910, Edinburgh. Jessie MacRae has been sent to a tenement building by her recently deceased father to bear a child for a wealthy man and his fiancée. The harrowing events that follow lead to a curse on the building and its residents—a curse that will last for the rest of the century.

Over nine decades, 10 Luckenbooth Close bears witness to emblems of a changing world outside its walls. An infamous madam, a spy, a famous Beat poet, a coal miner who fears daylight, a psychic: these are some of the residents whose lives are plagued by the building's troubled history in disparate, sometimes chilling ways. The curse creeps up the nine floors as an enraged spirit world swells to the surface, desperate for the true horror of the building's longest kept secret to be heard.

Luckenbooth is a bold, haunting, and dazzlingly unique novel about the stories and secrets we leave behind—and the places that hold them long after we are gone.
Jenni Fagan is an award-winning novelist, poet, screenwriter, and playwright. She is the author of two prior novels, The Panopticon and The Sunlight Pilgrims, as well as a collection of poetry, The Dead Queen of Bohemia. In 2013 Jenni was the only Scottish writer to be on Granta’s Best of Young British Novelists list. She lives in Edinburgh
Praise for Luckenbooth:

“[Luckenbooth] is a cabinet of curiosities that is both a love letter to the Scottish capital, and a knife to its throat. The sparking nervous system of the book is its characters, all broken, all reassembled in their own ways, like Kintsugi, the Japanese process of highlighting cracks by mending them with gold...Despite its darkness, the novel is carried by jagged delight and optimism, a bright hope coming through the walls and a fundamental belief in people. Filled with blistering social critique, Luckenbooth is an ambitious and ravishing novel that will haunt me long after.”
— Lauren Beukes

"In this inventive, experimental novel, Jenni Fagan traces a century in one Edinburgh tenement building and the lives of its occupants. When an unholy union forms between a childless government minister, his wife, and their fertile young maid — who happens to be the Devil’s own daughter — the building they live in is cursed for decades, affecting residents for generations."
— Bustle

"Fagan pulls out all the stops, looking evil straight in the eye and working the numerous components of this ambitious tale into a cohesive whole. "
— The Washington Independent Review of Books

"In Jenni Fagan’s stunning new novel, an apartment building at 10 Luckenbooth Close in Edinburough first is scene to a terrible crime, then witness to all the blazing currents of the 20th century, moving on to explore visions of alternative history and future dystopias. Perfect for those who liked Things in Jars by Jess Kidd."
— Molly Odintz

"The interwoven lives of the tenants of No. 10 Luckenbooth Close, a tenement in the heart of Edinburgh, drive this outstanding novel from Fagan (The Panopticon), set over the course of the 20th century. All the tenants’ stories enchant as the action builds to a satisfying conclusion. This highly original novel with its fairy tale quality will appeal to fantasy fans as well."
— Publishers Weekly, Starred Review

Praise for Jenni Fagan’s The Panopticon:

“Fagan has given us one of the most spirited heroines to cuss, kiss, bite and generally break the nose of the English novel in many a moon. Her prose beats behind your eyelids, the flow of images widening to a glittering delta. Vive Jenni Fagan, whose next book just moved into my ‘eagerly anticipated’ pile.”
— Tom Shone, The New York Times Book Review (front cover review)

“Fagan has created a feisty, brass-knuckled yet deeply vulnerable heroine, who feels like sort of a cross between Lisbeth Salander and one of Irvine Welsh’s drug-taking Scottish miscreants. Her novel is by turns gritty, unnerving, exhausting, [and] ferocious. A deeply felt and genuinely affecting novel.”
— Michiko Kakutani, The New York Times

“She writes about these young people with a deep sympathy for their violently disordered lives and an equally deep appreciation of their humor and resiliency. Fagan has a rousing voice, with its roundly rendered Scottish accent.”
— Ron Charles, The Washington Post

"The Panopticon is an exquisite first novel. Jenni Fagan has created a dark, disturbing, yet ultimately hopeful portrait of a young woman growing up alone. To say it is haunting is an understatement."
— Vanessa Diffenbaugh, New York Times bestselling author of The Language of Flowers

"Jenni Fagan has created a high-resolution portrait of a throwaway kid.This is a contemporary tragedy of the highest order."
— Carol Anshaw, New York Times bestselling author of Carry the One

“In the Margaret Atwood/The Handmaid’s Tale vein—very literary and suspenseful. I like books set in an altered reality—one that feels familiar and yet also deeply unfamiliar, that embodies some of the dailiness of life, and yet slowly reveals itself to be a very different, much more sinister place.”
— Gillian Flynn, Oprah.com

“Told in Anais’ raw voice, Fagan’s novel peers into the world inhabited by forgotten children, and, in Anais, gives us a heartbreakingly intelligent and sensitive heroine wrapped in an impossibly impenetrable exterior. Readers won’t be able to tear themselves away from this transcendent debut.”
— Booklist (starred review)

"Anais's ongoing internal dialog, her periodic reimagining of her life and situation, is enthralling. James Kelman's How Late It Was, How Late meets Ken Kesey's One Flew over the Cuckoo's Nest. Not to be missed."
— Library Journal (starred review)