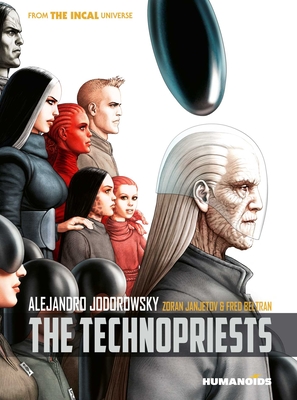 
On Our Shelves Now at:
The cosmic adventures of a young boy on his path to ridding the galaxy of an insidious technological plague. From legendary creator Alejandro Jodorowsky (The Incal, Metabarons, Jodorwsky's Dune).

After the Greek tragedy of "The Metabarons," Alexandro Jodorowsky returns to his biblical roots with this quest reminiscent of the story of Moses and set on a galactic scale. Its characters and the theme of virtual reality are tailor-made for artist Zoran Janjetov ("Before The Incal"), who finds in Jodorowsky a perfect collaborator. Albino, hero of this space odyssey, remembers here his childhood, his apprenticeship, and the big and small battles he had to fight to fulfill his ambitions in a universe where technological advances are paradoxically matched only by the cruelty and the barbarism of the forces controlling it.

This beloved saga off-shoot of The Incal is back in print! (The Incal will soon be a major motion picture from Academy Award- Winning director Taika Waititi)

Gorgeous Hardcover design is the ultimate way to read Technopriests.
Born February 7th, 1929, in Tocopilla, Chile, of a Jewish Ukrainian immigrant family. Jodorowsky was multi-talented from an early age, becoming skilled in puppetry and mime, in addition to writing, by his late teens. He traveled with a pantomime troupe in the 1950s, and within a couple years had made his way to Paris where he collaborated with the world-renowned mime Marcel Marceau. In the 1960s, Jodorowsky ventured further into the world of theater, creating in Mexico, the Panic Movement. This innovative artistic movement allowed him to creatively participate in over a 100 theater productions. The 1970s saw him transition into the world of film where he quickly put a defining stamp on all his cinematic works. He directed several cult films, namely the infamous "El Topo," a Midnight movie favorite. Shortly thereafter, Jodorowsky became attached to direct the adaptation of the famous Frank Herbert sci-fi epic novel "Dune." At the preparation stage of the film, he brilliantly assembled a team of extremely diverse and gifted artists such as HR Giger, Chris Foss, Dan O'Bannon, and Moebius, all of who would later be hired as concept artists on Ridley Scott's "Alien." The development of "Dune" came to a halt due to financial problems, but Jodorowsky, having been exposed to such immense visual talent, propelled himself into writing graphic novels, pairing up with the artist Moebius. This collaboration resulted in what many consider to be one of the most creative European sci-fi graphic novel series of all time, "The Incal," which went on to sell millions of copies worldwide. Since penning "The Incal," Jodorowsky continued writing top selling comic books with a wide variety of Europe's most talented artists, such as "The White Lama" (with Bess), "The Metabarons" (with Gimenez), "The Technopriests" (with Janjetov), and most recently "Bouncer" (with Boucq). Along with nurturing his many other talents, Jodorowsky remains a unique storyteller whose published contributions have secured his status as one of the world's most prolific graphic novel writers.

Zoran Janjetov is among the most prominent comics creators of former Yugoslavia and has been published worldwide. He is best known as the illustrator of "Before The Incal," also written by Alexandro Jodorowsky.