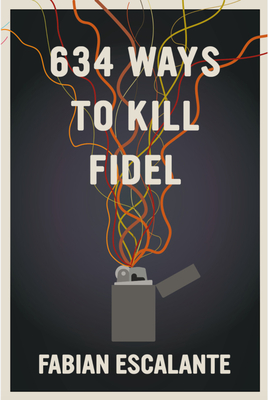 
On Our Shelves Now at:
A sprawling account of the various, creative, often bizarre, yet incredibly disturbing attempts to assassinate Fidel Castro. Soon to be a TV series from Jed Mercurio, show runner for "The Bodyguard," and Richard Brown, producer of "True Detective" and "Catch-22."

Fabián Escalante, the founder of the Cuban intelligence services, and head of the Cuban State Security Department, provides a clear-eyed first-person account of his experiences defending Fidel Castro from the extraordinary attempts to take his life. From lethal poisons to plastic explosives to bazookas, Escalante introduces and describes an array of assassination plots and historical figures and depicts the ensuing cat-and-mouse game in the midst of the Cold War.
Written in the style of a political thriller yet based on real events, 634 Ways to Kill Fidel Castro is a well-researched and documented series of vignettes put together by multiple investigations in Cuba and the experiences of the author, who participated in several of them; dozens of interviews with participants; extensive documentary evidence; and the collaboration of officials, and undercover agents who dismantled these plots. Filled with harrowing stories of deceitful FBI tactics such as moles who infiltrated the revolutionary Cuban government and gained a reputation with them with the ultimate goal of bombing their military bases. As well as undercover attempts to give Fidel poison laced cigars, Escalante takes the reader from DC to New York, Miami to Havana and uncovers the intricate conspiracy to silence dissent and kill Fidel Castro.
634 Ways to Kill Fidel Castro is filled to the brim with historical details on the CIA, Cuba, the communist movement, US government officials, and Fidel himself. Escalante’s first-hand account provides evidence of the lengths to which the CIA went through to assassinate Fidel Castro and the determined efforts to protect him and what he stood for.

Fabián Escalante Font (Havana, 1940) was a founder of Cuba's intelligence services and held various leadership roles over his 36 years in this service including, head of the Cuban State Security Department. director of Cuba's Center for Historical Investigations on State Security and directed Cuba's investigation into the assassination of JFK, which he later turned into a book.