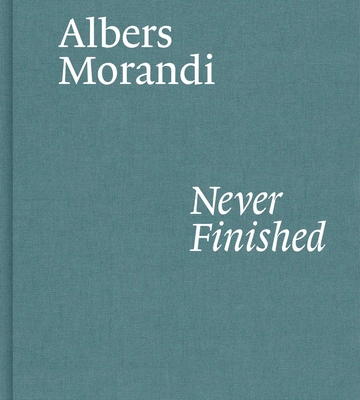 
Not On Our Shelves—Ships in 1-5 Days
An unprecedented catalogue exploring the formal and visual affinities and contrasts between Josef Albers and Giorgio Morandi—two of modern art’s greatest painters.

Rarely seen together, the artworks of Josef Albers (1888–1976) and Giorgio Morandi (1890–1964) share many similarities. Although they never met, both artists worked in series as they explored difference and potential through their distinctive treatment of color, shape, form, and morphology. They were also both influenced by Cezanne. As master illusionists and experts in proportion, they tackled similar conceits from different perspectives. Albers focused on the effects of subtle or bold changes and interactions in color, while Morandi made still lifes that treat simple objects as a cast of characters on a stage, exploring their relationship in space.

Published on the occasion of the critically acclaimed exhibition Albers and Morandi: Never Finished at David Zwirner New York in 2021, the book illuminates the visual conversation between these two artists. With the exhibition hailed by The New Yorker’s Peter Schjeldahl as “one of the best … I’ve ever seen,” this publication brings this unusual, thought-provoking pairing to your home. Gorgeous reproductions are accompanied by a roundtable about form and color between the exhibition’s curator, David Leiber; Heinz Liesbrock, the director of the Josef Albers Museum Quadrat Bottrop; and Nicholas Fox Weber, the executive director of The Josef and Anni Albers Foundation, as well as an essay by Laura Mattioli, the Morandi expert and founder of the Center for Italian Modern Art.
Josef Albers (1888–1976) is considered one of the most influential abstract painters of the twentieth century as well as an important designer and educator. Albers was born in Bottrop, Germany, and became a student at the Weimar Bauhaus in 1920, later joining the school’s faculty in 1922. In 1933, he and Anni Albers emigrated to North Carolina, where they founded the art department at Black Mountain College. In 1950, the Alberses moved to New Haven, Connecticut, where Josef was invited to direct the newly formed department of design at Yale University School of Art. Albers retired from teaching in 1958, just prior to the publication of his important Interaction of Color (1963).

Giorgio Morandi was born in 1890 in Bologna, Italy, where he lived until his death in 1964. From 1907 to 1913, he was enrolled at the Bologna Accademia di Belle Arti, where he later served as the professor of engraving and etching from 1930 until 1956. By 1920, Morandi established the small-scale depictions of still lifes and landscapes that he would pursue throughout his oeuvre, and that were associated with no other school or style but his own.

Laura Mattioli is the daughter of the important Italian collector Gianni Mattioli, who in 1949 acquired Pietro Feroldi’s collection that highlighted the relationship between Italian modernists and French Post-Impressionists, and which included works by Giorgio Morandi from the 1910s to the 1940s. With her father, Laura visited Morandi during her childhood and has lived with his paintings practically all her life. She holds a PhD in the history of art, and since 1984 she has managed her father’s collection, for which she has acquired additional works by Morandi. Mattioli has curated several exhibitions on the artist, including Last Morandi (1997–1998), in Verona and Venice; Giorgio Morandi: Late Paintings, 1950–1964 (2004), Lucas Schoormans Gallery, New York; and Giorgio Morandi et l’abstraction du réel (2010), Hotel des Arts, Toulon, France. In 2013, she founded the Center for Italian Modern Art, in New York, where she has presented two exhibitions on Morandi, in 2015–2016 and 2018–2019.

David Leiber, a partner at David Zwirner in New York, works closely with The Josef and Anni Albers Foundation, the Joan Mitchell Foundation, The Estate of Diane Arbus, and the Paul Klee Family as well as the Beijing-based contemporary painter Liu Ye.

Nicholas Fox Weber is a cultural historian and has been the executive director of the Josef and Anni Albers Foundation for the past four decades. During this time he has worked tirelessly to preserve the lasting achievements and legacies of the Alberses. He has written extensively on each artist, recently completing an unprecedented visual biography of these icons of twentieth-century art. Other books of his include artists such as Le Corbusier and Balthus. He is currently in the process of writing a groundbreaking new biography of the artist Piet Mondrian. He also spearheads Le Korsa, a nonprofit organization he founded in 2005 to assist with medical care and education in Senegal.
"The Zwirner show is one of the best installed that I’ve ever seen...the soft cosmos of Morandi is both relieved and refreshed by the architectonics of Albers, and vice versa. The artists share an intensity of artistic vocation."
— Peter Schjeldahl

"They were brothers in perseverance."
— Peter Schjeldahl

“...a matte volume that showcases the uncanny way color and light bridge the abstract and the representational”
— Cultured