The Doctors of the Warsaw Ghetto (Paperback) 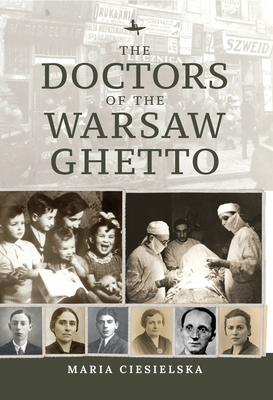 The Doctors of the Warsaw Ghetto (Paperback)


In Stock—Click for Locations
Based on years of archival research, 'The Doctors of the Warsaw Ghetto' is the most detailed study ever undertaken into the fate of more than 800 Jewish doctors who devoted themselves, in many cases until the day they died, to the care of the sick and the dying in the Ghetto. The functioning of the Ghetto hospitals, clinics and laboratories is explained in fascinating detail. Readers will learn about the ground-breaking research undertaken in the Ghetto as well as about the underground medical university that prepared hundreds of students for a career in medicine; a career that, in most cases, was to be cut brutally short within weeks of them completing their first year of studies.
Dr. Maria Ciesielska is a specialist in Family Medicine and a university lecturer with a doctorate in medical history. A keen personal interest in learning more about the fate of her Jewish peers in Warsaw during the Holocaust motivated Maria to publish an award-winning book on this topic in 2017 after years of research.For thirty years, Professor Emerita, Agata Krzychylkiewicz, lectured in Russian and European literature at the University of South Africa. A native of Poland, in 1970 she obtained an MA in Russian Philology at Wroclaw University, before emigrating to South Africa with her husband and sons in 1981. In 1999, she was awarded the degree DLitt et Phil for her thesis entitled "The Grotesque in the Works of Bruno Jasienski" (revised and published under the same title by Peter Lang [Bern], in 2006). During her academic career, Agata mainly focused on contemporary literature. She also was interested in translation theory, attempting to translate mainly short stories, several of which being published in Jewish Affairs and elsewhere. She also served as editor of the bilingual scholarly journal, Slavic Almanac. Luc Albinski is based in Johannesburg and is the co-founder of Vantage Capital's mezzanine finance business which offers long-term, growth capital to mid-size businesses across Africa. He has recently launched an education investment platform which, in the first instance, is targeting the countries of Central & Eastern Europe. Luc has a long-standing interest in development finance. After completing his MBA at INSEAD in France, he spent time working on projects in countries such as Brazil, Gabon, Romania and Bosnia with the World Bank (IFC). Luc is passionate about entrepreneurship. Before Vantage, he established an employee-benefits business in Poland which was ultimately successfully listed on the Warsaw Stock Exchange. Luc learnt about his Jewish origins in his early twenties. His interest in holocaust and genocide work springs from his personal history as well as from his on-the-ground involvement with a non-profit during the Bosnian conflict. Jeanette Friedman, a member of The Society of Professional Journalists, established her own company, The Wordsmithy, Llc. in 1979. That same year, she also founded Second Generation North Jersey for sons and daughters of Holocaust survivors. At The Wordsmithy, Ms. Friedman ghostwrites, edits and publishes books, most of them Holocaust memoirs, nursing books from handwritten manuscripts to the printed page. Her own book, Why Should I Care? Lessons from the Holocaust, written with David Gold, received critical acclaim from Holocaust educators. She also trains students to interview survivors for Names Not Numbers, a middle school Holocaust Education program. Friedman served on the NJ Governor's Task Force for Holocaust Education under Gov. Tom Kean and is one of the founders of the International Network of Children of Jewish Holocaust Survivors. She was a Second Generation advisor to the United States Holocaust Memorial Council and founder of an online group that exchanges information about current events, the Holocaust, character development in children and multicultural and ethnic understanding. From 1990-2004, she served as executive editor of the magazine Lifestyles. In addition to maintaining The Wordsmithy, Friedman continues her volunteer work in human rights/Holocaust education and is developing a Human Rights/Holocaust resource center for the Pocono Mountain region of Northeast Pennsylvania.Tali Nates is the founder and director of the Johannesburg Holocaust & Genocide Centre and chair of the South African Holocaust & Genocide Foundation. She is a historian who lectures internationally on Holocaust education, genocide prevention, reconciliation and human rights. Nates has published many articles and contributed chapters to several books, among them God, Faith & Identity from the Ashes: Reflections of Children and Grandchildren of Holocaust Survivors (2015), Remembering The Holocaust in Educational Settings (2018) and Conceptualizing Mass Violence, Representations, Recollections, and Reinterpretations (2021). She won many awards including the Kia Community Service Award (South Africa, 2015), the Gratias Agit Award (2020, Czech Republic) and the Austrian Holocaust Memorial Award (2021). She was one of the founders of the Holocaust and Tutsi Genocide Survivors groups in Johannesburg. Born to a family of Holocaust survivors, her father and uncle were saved by Oskar Schindler. The rest of the family was murdered.