A Unique People in a Unique Land: Essays on American Jewish History (Hardcover) 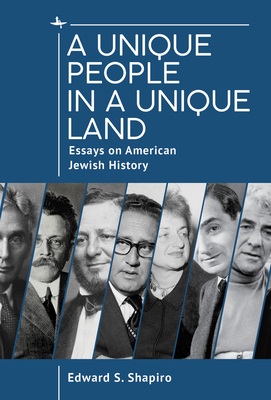 A Unique People in a Unique Land: Essays on American Jewish History (Hardcover)

This book is a collection of two dozen essays published over the past four decades on American Jewish history and culture. They discuss the role that Jews have played in American culture, sports, politics, business, and religion, as well as the nature of American antisemitism. The essays argue that the Jewish experience in America has been unique and this uniqueness has encouraged Jews to define their Jewish identity in multiple ways. In no other country has Judaism and Jewishness taken on so many diverse forms. While America has not been the promised land for Jews, it has been a land of promise. Jews have prospered in America and become part of the social, cultural, political, and economic mainstream. But whether Judaism and Jewish identity have also prospered is another question.

Edward S. Shapiro received his Ph.D. in history from Harvard University and is Professor Emeritus of History at Seton Hall University. His books include A Time for Healing: American Jewry Since World War II, We Are Many: Reflections on American Jewish History and Identity, and Crown Heights: Blacks, Jews, and the 1991 Brooklyn Riot.