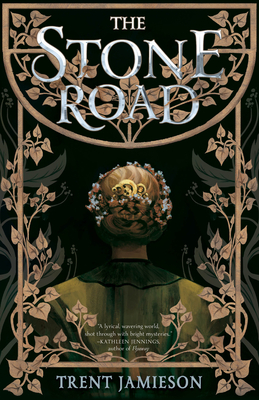 
On Our Shelves Now at:
On the day Jean was born, the dead howled. A thin scratch of black smoke began to rise behind the hills west of town: Furnace had been lit, and soon its siren call began to draw the people of Casement Rise to it, never to return.

Casement Rise is a dusty town at the end of days, a harsh world of grit and arcane dangers. While Jean’s stern, overprotective Nan has always kept Casement Rise safe from monsters, she may have waited too long to teach Jean how to face them on her own. On Jean’s twelfth birthday, a mysterious graceful man appears, an ethereal and terrifying being tied to her family’s secrets.

Now, Nan must rush Jean’s education in monsters, magic, and the breaking of the world in ages past. If Jean is to combat the graceful man and finally understand the ancient evil that powers Furnace, she will have to embrace her legacy, endure her Nan’s lessons, and learn all she can—before Furnace burns down her world and everyone in it.
Trent Jamieson is a multi-award winning Australian novelist and short story writer. He is the author of Day Boy, the Death Works series, and the Nightbound Land duology. When he’s not writing, Trent works as a bookseller at Avid Reader in Brisbane.
“A coming-of-age story with a dreamlike quality. . . . Those who appreciate fantasy that leans toward fable will gladly follow along on Jean’s journey.” —Booklist

“The Stone Road is lovely, hypnotic. I want to drink this book.” —H. A. Clarke, author of The Scapegracers

“Trent Jamieson’s The Stone Road is a heart wrapped in thorns. Its world, even as it unpicks itself at the seams, is shot through with bright mysteries. And the novel, like its heroine, holds dear a loving, quarrelling community, even as it understands that towns—like time and people—slip away like dust. The Stone Road is a cycle of mysteries, an invocation of kindness amidst decay, a promise to the living, and blessing for the dead.” —Kathleen Jennings, author of Flyaway

“The Stone Road . . . pulls you in and makes you linger over every page. I don’t know which to praise first—the worldbuilding, which had a depth that made it feel neverending; the prose, which made me want to underline whole passages; or the characters. . . . Perfect for fans of classics like The Last Unicorn (which is to say, anyone who likes good books). I know it’s something I’ll be recommending for years to come.” —Katherine Nazzaro, Manager of Porter Square Books: Boston Edition

“Trent Jamieson is . . . a significant talent, writing beautifully crafted tales that often have a baroque sensibility and resonate on an emotional level.” —Terra Incognita