Dirty Spanish: Third Edition: Everyday Slang from "What's Up?" to "F*%# Off!" (Paperback) 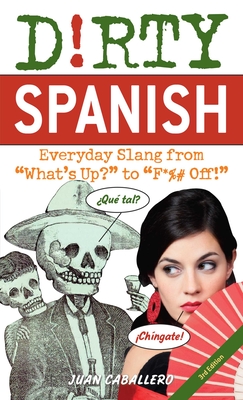 Dirty Spanish: Third Edition: Everyday Slang from "What's Up?" to "F*%# Off!" (Paperback)


Not On Our Shelves—Ships in 1-5 Days
Learn the slang words, modern phrases, and curses they definitely never taught you in Spanish class with this super-handy and hilariously improper English-Spanish phrasebook.

You already know enough Spanish to get by, but you want to be able to tell those inside jokes, greet your friends in a laid-back manner, and casually pick someone up at a bar.

From “What’s up?” to “Wanna go home with me?” Dirty Spanish will teach you how to speak like you're a regular on the streets of Madrid or Buenos Aires. But you’ll also discover material that goes beyond a traditional phrasebook, including:

Next time you’re traveling to Spain, Mexico, or Argentina, pick up this book, drop the textbook formality, and get dirty!
Juan Caballero is a doctoral candidate in Comparative literature. His studies have spanned the Argentine novel, psychoanalysis, sadomasochism, linguistics, film noir, third-world aesthetics, and socialist revisionism. He is a lifelong Californian and avid backpacker whose passions include competitive eating, contemporary art, and noise music.