Dirty French: Second Edition: Everyday Slang from "What's Up?" to "F*%# Off!" (Paperback) 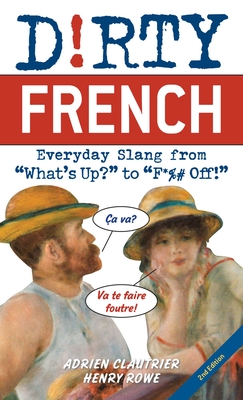 Dirty French: Second Edition: Everyday Slang from "What's Up?" to "F*%# Off!" (Paperback)


Not On Our Shelves—Ships in 1-5 Days
Learn the slang words, modern phrases, and curses they definitely never taught you in French class with this super-handy and hilariously improper English-French phrasebook.

You already know enough French to get by, but you want to be able to tell those inside jokes, greet your friends in a laid-back manner, and casually pick someone up at a bar.

From “what’s up?” to “Wanna go home with me?” Dirty French will teach you how to speak like you're a regular on the streets of Paris. But you’ll also discover material that goes beyond a traditional phrasebook, including:

Next time you’re traveling or chatting with your friends in “the language of love,” pick up this book, drop the textbook formality, and get dirty!
Adrien Clautrier in the about the author section: Adrien Clautrier is a self-employed mechanic born and raised in Marseille, France. A motorcycle and automobile enthusiast, he has completed two US coast-to-coast trips, one on a Harley-Davidson and the other in a Cadillac. When he is not in his garage or on the road, he reads nonstop (especially Frédéric Dard’s San-Antonio series) or listens to the stand-up comedies of the late French comedian Coluche.

Henry Rowe left Berkeley to play soccer in France. He never made it out of the amateur ranks but stayed for the used bookstores and Saint-Émilion wine cellars. He currently lives in Ménilmontant in Paris, frequents Mon Chien Stupide, and listens to everything from Serge Gainsbourg to Toulouse’s Jerry Spider Gang.