Dirty Russian: Second Edition: Everyday Slang from "What's Up?" to "F*%# Off!" (Paperback) 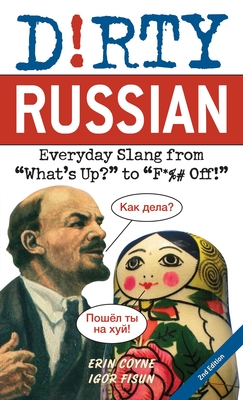 Dirty Russian: Second Edition: Everyday Slang from "What's Up?" to "F*%# Off!" (Paperback)


Not On Our Shelves—Ships in 1-5 Days
Learn the slang words, modern phrases, and curses they definitely never taught you in Russian class with this super-handy and hilariously improper English-Russian phrasebook.

You already know enough Russian to get by, but you want to be able to tell those inside jokes, greet your friends in a laid-back manner, and casually pick someone up at a bar.

From “what’s up?” to “Wanna go home with me?” Dirty Russian will teach you how to speak like you're a regular on the streets of Moscow. But you’ll also discover material that goes beyond a traditional phrasebook, including:

Next time you’re traveling to Russia, pick up this book, drop the textbook formality, and get dirty!
Igor Fisun is a native of Kiev, Ukraine, which, in moments of nationalist pride, he prefers to spell "Kyiv." He is a former student of Kiev PTU, where he quickly abandoned all interest in ever holding down a real job and instead embarked upon a career in freelance engraving. His native languages are Russian and Ukrainian, and he hopes someday to learn English well enough to talk his way out of a traffic ticket. His interests include cooking, Japanese art, cheap wine, and pissing people off on internet forums. He is ridiculously proud of his orchid collection.