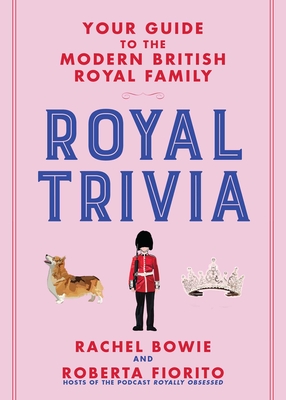 
Not On Our Shelves—Ships in 1-5 Days
Test your knowledge of Kate, William, Meghan, Harry, Diana, Charles and Elizabeth II!

This collection of fascinating facts and anecdotes about the British monarchy will keep you in the know and ready to impress with tid bits on all your favorite modern royals—perfect for cocktail hour (or afternoon tea) conversation. From the jaw-dropping weddings and headline-making fashion moments, to the births of new royals and history behind the most regal events, this book has trivia for any enthusiast. Inside you’ll find the royal scoop, including:

Geared toward fans of Netflix’s The Crown or anyone who loves the royals, this book is a great way to keep up with (and quiz your friends about!) one of the most iconic families in the world.
Rachel Bowie  is cohost of the Royally Obsessed podcast, recently named one of the best podcasts of 2021 by Town & Country. She's also director of special projects for PureWow.com, a role that has led her to cover the royals—say, test driving Kate Middleton's go-to coat brand or penning an op-ed about Prince Harry and Meghan Markle's future beyond the Palace—among other subjects for over six years. Her love of the royals was sealed at a young age following the death of Princess Diana, but also growing up as a mega-fan of Prince William.

Roberta Fiorito is cohost of the Royally Obsessed podcast, recently named one of the best podcasts of 2021 by Town & Country. She's also senior editor of branded content at Gallery Media Group, and has covered the royal beat for PureWow.com for over five years, meticulously poring over every Meghan Markle sighting and Kate Middleton outfit choice. She's been a devotee of the royals ever since her family moved to Scotland for a year, where she was immersed in U.K. culture and history.
"Take game night up a level with a royal-themed trivia night. Feel free to dress up in tiaras or fascinators and sip martinis (the Queen's cocktail of choice) while quizzing each other—corgis running around optional."
— Stephanie Petit