What They Didn't Teach You in German Class: Slang Phrases for the Cafe, Club, Bar, Bedroom, Ball Game and More (Paperback) 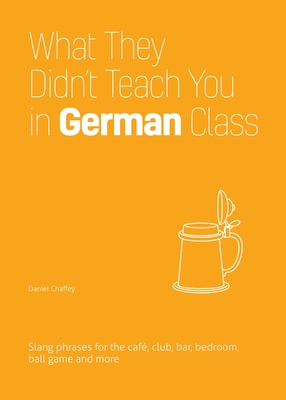 What They Didn't Teach You in German Class: Slang Phrases for the Cafe, Club, Bar, Bedroom, Ball Game and More (Paperback)


On Our Shelves Now at:
Learn all the German slang and current phrases you never learned in class with this handy German-English phrasebook for modern travelers.

Drinking a Hefeweizen at a Biergarten...
Dancing at Berlin’s hottest club...
Cheering for the local soccer team at the Stadion...

Drop the textbook formality and chat with the locals in Germany’s everyday language.

• What’s up? Wie geht’s?
• He/She is a real hottie. Er/Sie ist eine ganz heiße Nummer.
• What’s on tap? Was gibt’s vom Fass?
• I ordered the Currywurst. Ich bin den Currywurst.
• Do you wanna cuddle? Willst Du kuscheln?
• Gooooooal! Toooooor!
Daniel Chaffey is a writer, scholar, educator and eternal student of all things German. For the last twelve years, he has lived and worked in Germany, where he perfected his high German skills and learned to converse like a German sailor as a student, Fulbright Teaching Associate, translator and bartender. He holds an MA in German Studies and a teaching credential from Cal State Long Beach. He currently teaches German in Northern California, where he continues to work on other projects, including a lexicon of soldier slang from the Second World War.