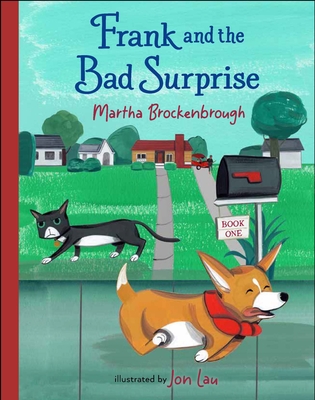 
On Our Shelves Now at:
Frank the cat has it good: Tons of toys, unlimited Whiskies™ and space and quiet to stretch and nap and think and write.

Then his people bring home a box. A box with something unexpected inside. A puppy.

A puppy who doesn't know the rules of naps. A puppy who slobbers and tackles and barks.

Frank will just have to find a better home. Should be easy, right?
Jon Lau tells whimsical stories that are inspired by nature, animals, and our interactions with them. He is based in Los Angeles.

Martha Brockenbrough is the author of This Old Dog. She likes both dogs and cats. Follow her on Twitter at @mbrockenbrough and marthabrockenbrough.com.

“Lots of white space, repeated vocabulary, and humorous spot and full-page illustrations create a welcoming reading environment for youngsters. The fact that Frank’s humans are a mixed-race gay couple only boosts this book’s value.” — Booklist

“A series opener that will delight cat AND dog fans.” —Kirkus Reviews