Know Your Shit: What Your Crap is Telling You (Hardcover) 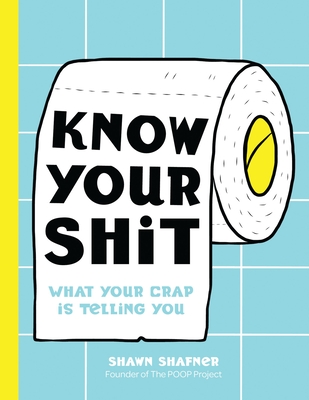 Know Your Shit: What Your Crap is Telling You (Hardcover)


Not On Our Shelves—Ships in 1-5 Days
Pushing For Change from the Bottom Up!

Poop is a big deal. All people and all beings do it on any good day. It’s basically at the center of everything. Know Your Shit lifts the lid off the potty taboo and breaks the stall doors down in search of the Perfect Poo. Along the way, learn what happens inside your body to make poo, how the process can go wrong, and simple fixes to make sure you stay in the Goldiplops Zone. Now, let us hold these poos to be self-evident; not all are created equal. But it is important to understand them in terms of personal health and global well-being. Because how are we supposed to fix all the super-complex problems in our world if we don’t know shit about shit?
Shawn Shafner (he/they) is an artist, educator, and facilitator. As founder of The People’s Own Organic Power (POOP) Project, Shawn catalyzes conversations about sustainable sanitation for every pooper—and the planet we poop on. From the floor of the United Nations to the mountains of Rwanda, he has spread poop positivity since 2010 on four continents, at colleges across the country, toured four critically-acclaimed shows, released three years of podcast episodes, produced one feature-length documentary, and had countless conversations about the doo we all do doo. More at thePOOPproject.org. When he’s not pooping, Shawn teaches meditation and mindful creativity, leads movement classes through the lineage of choreographer Tamar Rogoff, sings with Marisa Michelson’s Constellation Chor Ensemble, tells stories to young children and their families, and facilitates arts-integrated workshops for learners of all ages. Shawn is the humble recipient of some fancy fellowships, grants, and awards. His work is featured in three books (now four!), and he’s performed at Madison Square Garden, with the New York Philharmonic at Lincoln Center, and many more—but he doesn’t like to brag. He just wants to spread love, have fun, and make meaningful connections. So let’s get started already! ShawnShafner.com