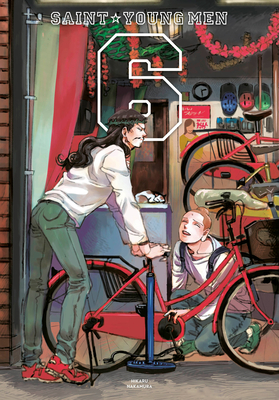 This is book number 6 in the SAINT YOUNG MEN OMNIBUS series.

Buddha, the Enlightened One, and Jesus, Son of God, continue their jovial adventures through Japan in search of new experiences. The saintly duo tests the resolve of their various “comic” personas, treads new ground with their old acquaintances in Tachikawa, and encounters a fresh cast of divine colleagues during their explorations of Tokyo. Walk the path of the wisest of guys, and finally learn the answer to age-old spiritual questions—like where to get a good haircut when you’re traveling, and how to be on social media when the self is an illusion?
Hikaru Nakamura has been active as a manga artist working in the genre of comedy since 2001, and before Saint Young Men, was most famous for Arakawa Under the Bridge, which is currently published by Vertical Comics and was made into an anime in 2010.