Off Our Chests: A Candid Tour Through the World of Cancer (Hardcover) 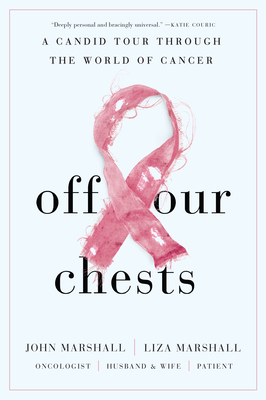 Off Our Chests: A Candid Tour Through the World of Cancer (Hardcover)

A surprisingly open memoir co-authored by the married duo of a world class oncologist and a cancer survivor about love, pain, hope, strength and resilience while navigating the overwhelming breast cancer advocacy movement.

Off Our Chests recounts the story of Liza and John's experience with her diagnosis and treatment. Written in alternating voices, Liza details her treatment, the complex decisions she had to make throughout her course of chemotherapy and radiation, including clinical trial participation and an elective double mastectomy, the added complexity of being treated at the cancer center of which John was the chief of hematology and oncology, and the emotional impact of knowing she may die as a young woman with young children.

John, who lost his own mother to cancer at the age of 13, provides an inside look into the world of cancer care and research, but also the perspective of someone who understands the medicine but who was unprepared for assuming the role of caregiver and worried husband. John adds insights into his world of running the clinical operations of the cancer center where Liza would receive her care, commentary on the breast cancer machine, the need for clinical research, the high cost of cancer care, and an easy to understand explanation of the clinical and scientific background of oncology.

While they both felt that they were already expert commentators on their own "Cancer Channel" during the course of Liza's illness, they both came to realize how little understanding they truly had of what a cancer diagnosis does to the patient, caregivers, children, family members, and friends. Liza and John share their most intimate thoughts, including many that were previously unsaid--even between the two of them. Both gain an understanding of the other's life, a deeper appreciation of what it means to be a cancer patient, and of the emotional strains of being an oncologist where so many of the patients die on their watch.

John Marshall is a medical oncologist and a professor at Georgetown University, and he is an internationally recognized expert in gastrointestinal cancers and the development of new treatments for cancer. He has been outspoken on controversial issues in cancer research, including his criticism of the dominance and success of breast cancer advocacy and research at the unfortunate expense of other specialties.Liza Marshall is an attorney, who retired from the practice of law in 2005 to manage her family. She then became involved in the establishment of a cancer support organization in the Washington, DC area, and she remains deeply involved in their work. In 2006, when she was 43 years old, Liza was diagnosed with a high-risk Stage 3 triple negative breast cancer.