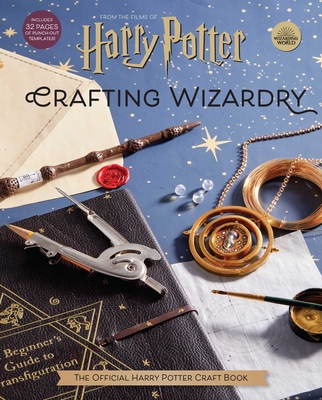 
Not On Our Shelves—Ships in 1-5 Days
Over 25 official crafting activities inspired by the Harry Potter films.

Filled with imaginative projects, this official book of craft activities channels the magic of the Wizarding World into your home.

Featuring over 25 crafts covering a range of skill levels, Crafting Wizardry includes clear, step-by-step, illustrated instructions so that the whole family can share in the magic. Inside you’ll learn how to craft your very own wand, decorate your home to showcase your Hogwarts house pride, create your own pop-ups, and so much more.

Matthew Reinhart studied industrial design at the Pratt Institute in Brooklyn, New York, before finding his calling as a paper engineer. His books include the best-selling Star Wars: A Pop-Up Guide to the Galaxy, Game of Thrones: A Pop-Up Guide to Westeros, and DC Super Heroes: The Ultimate Pop-Up Book, among many other award-winning titles. He lives in San Francisco.
"Craft time just got more fun with this new book for creatives of all levels."
— Red Tricycle

"A must-have for anyone looking to fill their home with handmade magic."

"Designed with care and crafted with insight."
— The Film Stage