With a Dog AND a Cat, Every Day is Fun, volume 5 (Paperback) 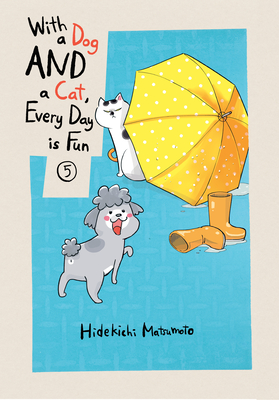 With a Dog AND a Cat, Every Day is Fun, volume 5 (Paperback)


Not On Our Shelves—Ships in 1-5 Days
Furry Companions!

Having lived with their owner under the same roof for 10 years, both Inu-kun and Neko-sama have grown some human-like qualities. While Hidekichi goes to the toilet in the middle of the night, Inu-kun takes over the whole bed just to see how she’d react. And Neko-sama, who’s actually a scaredy-cat, deliberately naps beside a trash bag just to prove that he wasn’t scared out of his wits by it earlier.
Animals can’t talk, but there are so many ways they communicate and interact with each other.
It may have been 10 years already, but every day is different and it never gets old watching them eat, play, and sleep.
Hidekichi Matsumoto began her career in 2008 by winning the 1st Shonen Rival Comic award, with her submission of Honto ni Atta! Reibai-Sensei, that later on went on to become serialized in Monthly Shonen Rival magazine.
This manga later on receives the 35th Kodansha Manga Award for Children's genre.

In addition Matsumoto has worked on two other serialized manga and currently working on With a Dog and Cat, Every Day is Fun.