The Heart of Business: Leadership Principles for the Next Era of Capitalism (Hardcover) 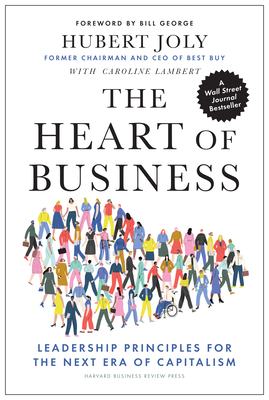 The Heart of Business: Leadership Principles for the Next Era of Capitalism (Hardcover)

By Hubert Joly, Caroline Lambert (With)

How to unleash "human magic" and achieve improbable results.

Hubert Joly, former CEO of Best Buy and orchestrator of the retailer's spectacular turnaround, unveils his personal playbook for achieving extraordinary outcomes by putting people and purpose at the heart of business.

Back in 2012, "Everyone thought we were going to die," says Joly. Eight years later, Best Buy was transformed as Joly and his team rebuilt the company into one of the nation's favorite employers, vastly increased customer satisfaction, and dramatically grew Best Buy's stock price. Joly and his team also succeeded in making Best Buy a leader in sustainability and innovation.

In The Heart of Business, Joly shares the philosophy behind the resurgence of Best Buy: pursue a noble purpose, put people at the center of the business, create an environment where every employee can blossom, and treat profit as an outcome, not the goal.

This approach is easy to understand, but putting it into practice is not so easy. It requires radically rethinking how we view work, how we define companies, how we motivate, and how we lead. In this book Joly shares memorable stories, lessons, and practical advice, all drawn from his own personal transformation from a hard-charging McKinsey consultant to a leader who believes in human magic.

The Heart of Business is a timely guide for leaders ready to abandon old paradigms and lead with purpose and humanity. It shows how we can reinvent capitalism so that it contributes to a sustainable future.

Hubert Joly is the former Chairman and Chief Executive Officer of Best Buy Co., Inc. where he led the company's turnaround and transformed it into an industry leader, consistently rated one of the best places to work for. He is now a senior lecturer at the Harvard Business School.He is also a member of the board of directors of Johnson & Johnson and Ralph Lauren Corporation, and a vice chairman of the Business Council. He has endowed the Joly Family chair in Purposeful Leadership at HEC Paris where he actively collaborates with the faculty.Prior to Best Buy, he was the CEO of Carlson Companies, a global leader in the hospitality and travel industry, a senior executive at Vivendi S.A., the president of EDS France and a partner at McKinsey & Company. He is a graduate of HEC Paris and Institut d'Etudes Politiques de Paris.Hubert has been recognized as one of the top 100 CEOs in the world by Harvard Business Review, one of the top 30 CEOs in the world by Barron's, and one of the top 10 CEOs in the US by Glassdoor. He is a knight in the French Legion of Honor and the French National Order or Merit.Writer Caroline Lambert has collaborated on books with a wide range of change makers and thought leaders, including the former President of Malawi, anti-corruption crusaders, and entrepreneurs and government officials. Most recently, she cowrote the bestseller Aligned with Hortense le Gentil.As a journalist and Deputy Asia Editor for The Economist, Caroline wrote about business, economics, and politics, earning the Diageo Africa Business Reporting Award and the Sanlam Award for Excellence in Financial Journalism. Caroline holds an MBA from INSEAD and an MA in international relations from the Johns Hopkins University's School of Advanced International Studies, where she was awarded the Groove Haines Award in International Policy. She is a former Visiting Fellow at the Center for Global Development.You can find Hubert Joly at linkedin.com/in/hubertjoly/.