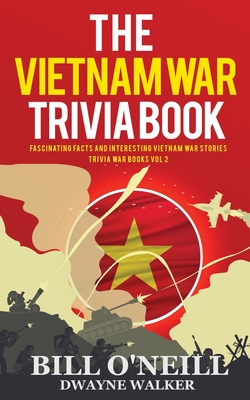 The Vietnam War. From the gory photos captured on the ground, to the protest songs that soundtracked a generation of rebels and radicals, this twenty-year war left a mark on the world that's not going to disappear soon. If you live in the United States (not to mention Vietnam itself), you've probably been affected by the war - whether you know it or not.

But do you wish you had answers to some questions about the war? What were the stories behind the iconic pictures? Why did it divide the United States more than any war before or since? Would you like to be able to casually explain an issue or relate a story that would shock or impress the whole room?

With the help of this Vietnam War book, you can In just a few minutes a day, you can be an expert in Vietnam War history, and impress both your friends and your history teachers.

Each chapter of our trivia books is broken up into fifteen bite-sized sections. These sections are either interesting stories, or clear, simple break-downs of the Vietnam War's main issues. It's a pretty complicated war, but unlike most war books, this one will make those difficult issues seem easy and exciting. Every chapter also ends with twenty fascinating facts and five quick questions to test your knowledge. And unlike some Vietnam War books, we're not going to overwhelm you with a million dates and names - our Vietnam War stories are guaranteed to both intrigue and educate

Get ready to meet characters from Ho Chi Minh, Vietnam's George Washington, to Peter Lemon, drug enthusiast and Medal of Honour winner. Find out what led to the war, and why it went so badly. Meet the people in Vietnam who risked their lives, and the people in America who stood up against the war. Learn why the Soviet Union stayed away, how a herbicide changed the definition of a war crime, and how Harris Tweed suits saved lives.