The Great Book of Colorado: The Crazy History of Colorado with Amazing Random Facts & Trivia (Paperback) 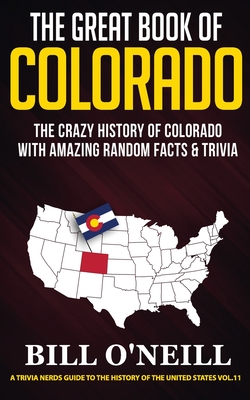 The Great Book of Colorado: The Crazy History of Colorado with Amazing Random Facts & Trivia (Paperback)

How much do you know about the Centennial State? There's so much to learn about Colorado that even natives of the state don't know In this trivia book, you'll learn about the state's history, pop culture, inventions and so much more

In The Great Book of Colorado, you'll find the answers to the following questions:

And so much more

This book is packed with facts about Colorado Some of the facts will be shocking. Others may be sad. Some will give you goosebumps. But the one thing they all have in common is that they're all interesting

Whether you think you already know all there is to know about Colorado or you don't know anything about the Centennial State, you're guaranteed to learn something new. You'll even impress your history teacher

So, what are you waiting for? Dig in now to learn more about Colorado