A Mother’s Manual for the Women of Ferrara: A Fifteenth-Century Guide to Pregnancy and Pediatrics (The Other Voice in Early Modern Europe: The Toronto Series #89) (Paperback) 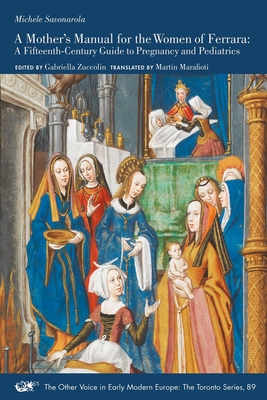 A Mother’s Manual for the Women of Ferrara: A Fifteenth-Century Guide to Pregnancy and Pediatrics (The Other Voice in Early Modern Europe: The Toronto Series #89) (Paperback)


Coming Soon—Pre-Order Now
The first treatise of its kind to be written in a European vernacular.

Around 1460, Michele Savonarola produced the extraordinary Mother’s Manual for the Women of Ferrara, a gynecological, obstetrical, and pediatric treatise composed in the vernacular so that it could be read not only by the learned but also by pregnant and nursing mothers and the midwives and wet nurses who presided over childbirth. Savonarola’s work is not merely a trivial set of instructions, but the work of a learned scholar who drew on, among others, the ancient Greek physicians Hippocrates and Galen, and Avicenna’s Canon of Medicine. The first of its kind, Savonarola’s Mother’s Manual helps readers understand both the development of late-medieval and early-modern obstetrics and gynecology, as well as the experiences of women who turn to advice books for help with reproductive issues. This book also provides a key to understanding why and how a new genre of book—the midwifery manual or advice book for pregnant women—arose in sixteenth-century Italy and eventually became a popular genre all over Europe from the early modern period to the present day.

Gabriella Zuccolin is a lecturer in medieval philosophy at the University of Pavia in Italy.

Martin Marafioti is professor of Italian at Pace University. He is the author of Storytelling as Plague Prevention in Medieval and Early Modern Italy.

“Savonarola’s fifteenth-century manual on obstetric and pediatric medicine, written in the vernacular, is the first text of its kind that could be read not only by male practitioners but also by uneducated midwives and women in general—or such was its stated purpose, for it was addressed to ‘the women of Ferrara.’ The introduction by Zuccolin offers a thorough reading of the innovative work by the Ferrarese physician Michele Savonarola. The translation by Marafioti is both accurate and instructive, subtly capturing the distinctive voice of the author. Savonarola’s manual is a wonderful addition to the great works by women and on women’s issues that The Other Voice Series has lovingly published through the years.”
— Valeria Finucci , Professor Emerita of Romance Studies, Duke University