Stalking the Atomic City: Life Among the Decadent and the Depraved of Chornobyl (Hardcover) 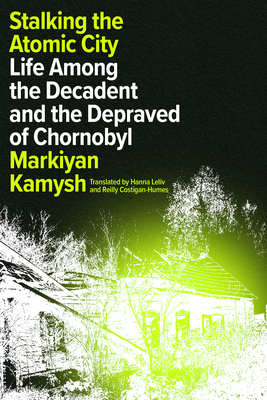 Stalking the Atomic City: Life Among the Decadent and the Depraved of Chornobyl (Hardcover)


Not On Our Shelves—Ships in 1-5 Days
“His is a voice that must be heard.” —Patti Smith

“A poetic rush to madness. . . a stunning, original voice as lyrical as it is unnerving."
—Alan Weisman, author of The World Without Us and Countdown

"In the shadow of catastrophe, Markiyan Kamysh writes with all of youth’s wayward lyricism, like a nuclear Kerouac." —Rob Doyle, author of Threshold

A rare portrait of the dystopian reality of Chornobyl, Ukraine, as it was before the Russian occupation of 2022.

Since the nuclear disaster in April 1986, Chornobyl remains a toxic, forbidden wasteland. As with all dangerous places, it attracts a wild assortment of adventurers who feel called to climb over the barbed wire illegally and witness the aftermath for themselves. Breaking the law here is a pilgrimage: a defiant, sacred experience.

In Stalking the Atomic City, Kamysh tells us about thieves who hide in the abandoned buildings, the policemen who chase them, and the romantic utopists who have built families here, even as deadly toxic waste lingers in the buildings, playgrounds, and streams. The book is complete with stunning photographs that may well be the last images to capture Chornobyl’s desolate beauty since occupying Russian forces started to loot and destroy the site in March 2022.

An extraordinary guide to this alien world many of us will never see, Kamysh’s singular prose that is both brash and bold, compared to Kerouac and gonzo journalists, captures the understated elegance and timeless significance of this dystopian reality.
Markiyan Kamysh is a Ukrainian writer who, since 2010, has illegally explored the Chornobyl Exclusion Zone and represents it in literature. He is the son of a Chornobyl liquidator who died in 2003. His first book, Stalking the Atomic City, was translated into multiple languages. You can also follow Markiyan on Instagram, @markiyankamysh. He lives in Kyiv.
"If Hunter S. Thompson were to write a Lonely Planet Guide to the Zone, it might sound something like Stalking the Atomic City—but Kamysh’s range is broader, his perceptions and language more nuanced."
—Elizabeth T. Gray, Jr, The Harvard Review

"An existential travel guide and an experiment in gonzo psychogeography, it stirs obvious comparisons with Hunter S Thompson ... mesmerising."
—Telegraph

"In “Stalking the Atomic City,” Mr. Kamysh gives an impressionistic account of sneaking into and guiding daring travelers around the Exclusion Zone. [...] His book’s subtitle—“Life Among the Decadent and the Depraved of Chornobyl”—winks at Hunter S. Thompson’s zany report on the 1970 Kentucky Derby, and the book’s set pieces are appropriately gonzo...The voice of the “Chornobyl underground in literature” approaches his calling with a smirking fatalism."
—Benjamin Shull, The Wall Street Journal

"Every once in a while, I’ll read something about tourists venturing into the area around Chornobyl for a day or two, and the effect is somewhat dizzying. Markiyan Kamysh’s new book is infinitely more so—this is an intimate, lived-in account of a ruined landscape and the people who find themselves drawn to it. It’s a haunting, immersive read."
—Tobias Carroll, Words Without Borders

"...the rot and ruin of Stalking the Atomic City is rendered in gorgeous prose that highlights the sublime beauty of its toxic setting."
—CrimeReads

"Stalking the Atomic City is a brilliant, angry, witty, passionate book about the end of the future and what happens afterwards -- Tarkovsky meets Hunter S. Thompson. Read it."
—Kevin Power, author of White City

"A voice that must be heard."
—Patti Smith

"The exhilaration of the intrepid trespasser sings throughout this crass, funky ode to an addiction to living in the realm of desolation."
—Peggy Kurkowski, Shelf Awareness

"In the shadow of catastrophe, Markiyan Kamysh writes with all of youth’s wayward lyricism, like a nuclear Kerouac."
—Rob Doyle, author of Threshold

"A gonzo account of life as a 'stalker'—a shadowy thrill-seeker haunting the Chornobyl exclusion zone after dark, sneaking past the guards and scaling radio masts. Kamysh’s throbbing, fragmentary prose offers heart-stopping insight into what drives those who choose to trespass in dangerous places: reckless abandon in abandoned places."
—Cal Flyn, author of Islands of Abandonment

"Evocative... a stark metaphor for post-Soviet depravity.... Captures the zone's strange mix of beauty and bleakness with precision. A captivating study of 'the most exotic place on earth'."
—Publishers Weekly

"Not since Malcolm Lowry’s Under the Volcano have I been so enthralled by such a poetic rush to madness. But that was fiction: Markiyan Kamysh’s epic immersion in this dread symbol of humanity’s self-inflicted undoing is shockingly real, recounted in a stunning, original voice as lyrical as it is unnerving."
—Alan Weisman, author of The World Without Us and Countdown

"Although the sad and dark atmosphere of the Zone might suggest a merciless chronicle of the ghosts that the Chornobyl disaster released into history, Kamysh is moving, escalating with maturity the register of his language from energetic to ardent, melancholy theology."
—Corriere della Sera

"A fantastic account about the reality of disaster… With morbid fascination, Kamysh forcefully draws us through this territory of death where the memories of the Soviet Union are being gradually buried… A true backpacker’s guide for disaster tourists."
—L'Humanité (France)

"As much a radioactive walk as a fascinating poem on the 'destroyed' youth who live behind the barbed wire of this irradiated space."
—20 Minutes (France)

"A stunning book… a personal and hallucinatory account of this unique place. In the zone, no one can escape their ghosts."
—Le Nouvel Observateur (France)

"A flamboyant story... A wild trip to the heart of a radioactive jungle."
—Les Inrockuptibles (France)