The Problem with Prophecies (The Celia Cleary Series #1) (Hardcover) 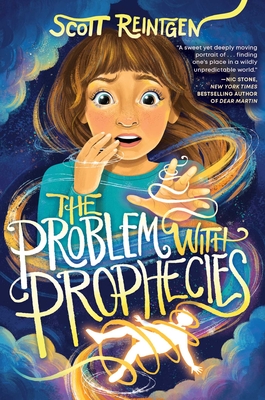 The Problem with Prophecies (The Celia Cleary Series #1) (Hardcover)


In Stock—Click for Locations
“A sweet yet deeply moving portrait of the highs and lows involved in finding one’s place in a wildly unpredictable world.” —Nic Stone, New York Times bestselling author of Dear Martin

A young seer’s first prophetic vision upends her life and sets her off on a desperate quest to change fate in this contemporary fantasy middle grade novel with “heart, humor, and a plot that keeps those pages flying” (Carlos Hernandez, award-winning author of the Sal and Gabi series).

Most people inherit eye colors or heirlooms, but for Celia Cleary, the gift of prophecy has been passed down in her family for generations. And on the 4,444th day of her life, Celia will have her first vision. But nothing could have prepared her for what she sees—the quiet boy down the street, Jeffrey Johnson, is about to die.

Determined to save him despite her grandmother’s warnings against it, Celia alters events to stop her vision from playing out. But for each prophecy she avoids, another one takes its place, putting Jeffrey in constant danger. Fate has made its choice, and it’s not giving up the hunt.

Focusing on homework or friends isn’t easy when you’re going head-to-head with death, and keeping Jeffrey Johnson alive is throwing Celia’s seventh grade year into chaos. It doesn’t help that she’s getting to know Jeffrey more and more with each new rescue attempt. It really doesn’t help when she realizes she kind of likes him.

Will Celia’s gifts be enough to thwart fate? Or are some things in life inevitable?
Scott Reintgen is a former public school teacher and still spends summers teaching middle schoolers dark fiction and fantasy at Duke Young Writers’ Camp. The birth of his children has convinced him that magic is actually real. He lives in North Carolina, surviving mostly on cookie dough and the love of his wife, Katie. Scott is the author of the Nyxia Triad and Ashlords series and A Door in the Dark for young adults, as well as the Talespinners series and the Celia Cleary series for middle graders. You can follow him on Facebook, Instagram, and Twitter at @Scott_Thought.
"I've never read a book that so deftly combines an exploration of Tough Stuff—like the finality of death—with stepping into an understanding of one's own agency. Reintgen has painted a sweet, yet deeply moving portrait of the highs and lows involved in finding one's place in a wildly unpredictable world."
— Nic Stone

"The Problem with Prophecies has it all: a great protagonist; a magical system to ignite the imagination; heart, humor, and a plot that keeps those pages flying. This book is the best reminder imaginable of why we all should read more."