Better Nate Than Ever (Paperback) 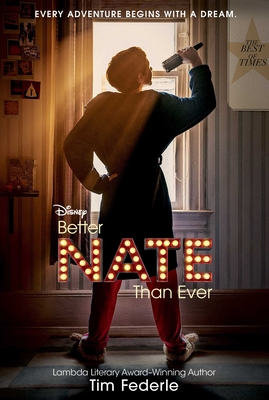 Better Nate Than Ever (Paperback)


Not On Our Shelves—Ships in 1-5 Days
Soon to be a Disney+ Original movie!

“The Nate series by Tim Federle is a wonderful evocation of what it’s like to be a theater kid. Highly recommended.” —Lin-Manuel Miranda, star and creator of the musical, Hamilton

A small-town boy hops a bus to New York City to crash an audition for E.T.: The Musical in this winning middle grade novel that The New York Times called “inspired and inspiring.”

Nate Foster has big dreams. His whole life, he’s wanted to star in a Broadway show. (Heck, he’d settle for seeing a Broadway show.) But how is Nate supposed to make his dreams come true when he’s stuck in Jankburg, Pennsylvania, where no one (except his best pal Libby) appreciates a good show tune? With Libby’s help, Nate plans a daring overnight escape to New York. There’s an open casting call for E.T.: The Musical, and Nate knows this could be the difference between small-town blues and big-time stardom.

Tim Federle’s “hilarious and heartwarming debut novel” (Publishers Weekly) is full of broken curfews, second chances, and the adventure of growing up—because sometimes you have to get four hundred miles from your backyard to finally feel at home.
Tim Federle is the showrunner and executive producer of High School Musical: the Musical: the Series, which he created for Disney+. His novels include the New York Times Notable Book Better Nate Than Ever and its Lambda Literature Award–winning sequel—which Lin-Manuel Miranda called “a wonderful evocation of what it’s like to be a theater kid” (New York Times). A film adaptation of Nate, written and directed by Federle, will premiere on Disney+ in spring 2022. The film stars Aria Brooks, Joshua Bassett, Lisa Kudrow, and Rueby Wood as Nate. Tim’s hit series of cocktail recipe books, including Tequila Mockingbird, have sold over half a million copies worldwide. He cowrote the Broadway musical adaptation of Tuck Everlastingand won the Humanitas Prize for cowriting the Golden Globe and Academy Award–nominated Best Animated Feature Ferdinand, starring John Cena and Kate McKinnon. A former Broadway dancer, Tim was born in San Francisco, grew up in Pittsburgh, and now divides his time between Los Angeles and the internet.
"Critics are raving about Nate."
— CNN

"The book I needed--and would have adored--when I was a kid. Federle writes from the heart and hits you in the gut--not to mention your funny bone."
— Jesse Tyler Ferguson, star of Modern Family

"A smash hit! If there were a Tony Award for books, it would go to Better Nate Than Ever."
— Alan Menken, Tony and Oscar-winning composer of Newsies and Beauty and the Beast

“No one captures Broadway or the kids who want to be part of it with the humor, insight and heart of Tim Federle. This hysterical and heartwarming story is for everyone who dreams of going out there a middle-schooler and coming back a star.”
— Thomas Schumacher, Tony Award–winning producer of The Lion King

"I can’t stop reading this book! Nate Foster’s hilarious and touching adventures en route to making it big on Broadway just kill me—I’m falling in love with New York City all over again, and with Nate for the first time. Please, Tim Federle, take a break before writing your next book, so I'll have time to write mine. I can only hope it's half as much fun as Better Nate Than Ever!"
— James Howe, author of The Misfits

"The funny, awkward, vulnerable Nate is an insightful and entertaining narrator for this adventurous tale about an ugly duckling learning to experience and embrace his inner swan."
— The New York Times Book Review

“[A] charming debut by a rising theater star.”
— Entertainment Weekly

"From his obsession with the first franchise restaurant he sees in New York to his infectious enthusiasm for city-life, Nate is the quintessential starry-eyed small-town boy in the Big Apple...Between the hijinks and the humor, however, Nate reveals himself to be a kid who accepts that he is a disappointment to his conventional family and yet still remains solidly himself, optimistically certain that there is a place for guys like him somewhere in the world. There’s plenty of substance to go along with the razzle-dazzle here, so sit back and enjoy the show."
— BCCB, Recommended

"A story of Broadway dreams tailor-made for the younger side of the Glee audience...Nate is a quirky and endearing leading man from the start, and anyone who has ever felt out of place will easily identify with him. It’s a joy to watch him fall head over heels for a city that couldn’t care less about him—in the best possible way...Federle’s debut addresses—deftly—big and solemn issues in the second half of the novel, particularly with regard to family, sexuality and religion. Bravo, Nate!"
— Kirkus Reviews

"Funny and insightful...This talented first-time author has made the classic Chorus Line theme modern and bright for the Glee generation."
— Booklist

"Filled with adventure, suspense, plenty of humor, and incredibly unique characters, Better Nate than Ever will be enjoyed by anyone who has ever decided to stop waiting, and make their own dreams come true."
— Bookpage

“Judy Blume as seen through a Stephen Sondheim lens -- with a dash of Lewis Carroll whimsy. As long as Federle wants to tell stories, a new generation of Broadway-loving theater fans has a voice in young adult literature.”
— Huffington Post

“The Nate series by Tim Federle is a wonderful evocation of what it’s like to be a theater kid. Highly recommended.”
— Lin-Manuel Miranda, star and creator of the musical, Hamilton