In the Mix (Fearless Series #3) (Hardcover) 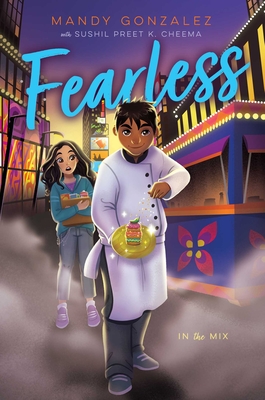 In the Mix (Fearless Series #3) (Hardcover)

This is book number 3 in the Fearless Series series.

Better Nate than Ever meets Love Sugar Magic in this sweet third novel in the Fearless middle grade series from Hamilton and Broadway star Mandy Gonzalez about a young thespian who feels caught between his love of baking and theatre.

Twelve-year-old Hudson Patel has two great loves: Broadway and baking! In addition to giving his all to his role in the hit show Our Time, Hudson takes pride in keeping his castmates and fellow Fearless Squad members well-fed with all the delicious treats he creates.

When the call comes in for a big baking show—with the winner receiving a spot at a kiosk in Times Square—the Squad encourage him to enter. They just know that kiosk should be his. But Hudson struggles to create a showstopper, and his friends realize if Hudson goes all-in with the baking, he may not have time to spare for his stage role.

Hudson goes to his grandmother for help, and she suggests going back to his roots, to be proud of who he is, and to show that in his culinary creation. With time running out, can Hudson find the magical ingredient that will put him in the spotlight having to choose between his passions?
Mandy Gonzalez has thrilled audiences on Broadway, lit up the screen on television, been published in Harvard Business Review, and started a social movement. Currently starring as Angelica Schuyler in Hamilton on Broadway, she also recently appeared in Madam Secretary as recurring character Lucy Knox and is known for originating the role of Nina Rosario in the Tony Award­­–winning show, In the Heights. Mandy’s debut album, Fearless, reached #13 on the iTunes pop charts. Mandy is also an author—having published a widely cited article in the Harvard Business Review on how to overcome one’s fear of public speaking. Most dear to her heart, Mandy is the proud founder of #FearlessSquad—a social media movement for inclusiveness and belonging. The movement connects millions of people around the world, encourages them to be their best selves, and helps them empower each other.

Sushil Preet Kaur Cheema is first generation American with roots in India and East Africa. Her interest in storytelling began in elementary school, leading her to a career in journalism. She has been a freelancer for The New York Times and a staff multimedia reporter for The Wall Street Journal. Now based in her hometown of Tampa, Florida, she continues to weave storytelling into her work as an executive coach. She is forever grateful to her parents and her partner for their love and support.