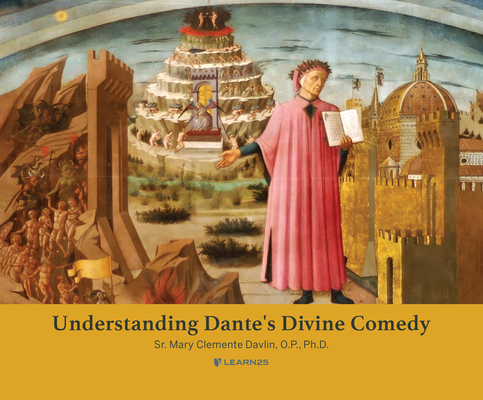 
Special Order—Subject to Availability
Dante Alighieri's fourteenth-century masterpiece, the Divine Comedy, is widely held to be the supreme work of Italian literature. Moreover, it is a cornerstone of the Western Christian tradition. Now, one of Catholicism's most esteemed English professors shares her deep knowledge of Dante's life and letters with you. Of the three-part Divine Comedy, the Inferno is the most familiar to readers today. This comprehensive series lets you dive beneath the surface of the Inferno as well as the Purgatorio and Paradiso. The more you understand Dante's life, the better you'll understand his deeply allegorical epic poem--rumored to be a true record of his midlife journey. In this 12-lecture series, Sister Mary Clemente Davlin guides you through Dante's widely influential narrative--just as Virgil guides Dante through the afterlife in the text. Having studied the Divine Comedy in Florence and taught literature for many years, Sr. Clemente does an expert job of highlighting the most important parts of the poem. She helps you grasp the ideas behind Dante's work, making them interesting and accessible to both first-time and returning readers. Unlike most English teachers, Sr. Clemente offers you a reading of the text steeped in her own Catholic faith. In the end, you will turn to one of the most striking passages in Dante's Divine Comedy: the description of heaven. Throughout, Sr. Clemente will be there to help you understand the literal action, the beautiful composition, and the enduring relevance of this exemplary piece of spiritual literature.