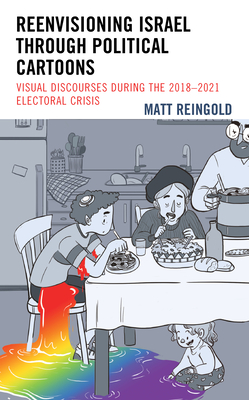 
Special Order—Subject to Availability
Reenvisioning Israel through Political Cartoons: Visual Discourses During the 2018-2021 Electoral Crisis examines the ways in which the work of Israeli political cartoonists broadens conversations about contemporary challenges in the country. Matt Reingold shows how 21 cartoonists across 10 different Israeli newspapers produced cartoons in response to the country's social and political crises between December 2018-June 2021, a period where the country was mired in four national elections. Each chapter is structured around an issue that emerged during this period, with examples drawn from multiple cartoonists. This allows for fertile cross-cartoonist discussion and analysis, offering an opportunity to understand the different ways that an issue affects national discourse and what commentaries have been offered about it. By focusing on this difficult period in contemporary Israeli society, the volume highlights the ways that artists have responded to these national challenges and how they have fashioned creative reimaginings of their country.
Matt Reingold holds a PhD in Jewish education and teaches Jewish history and Jewish thought at TanenbaumCHAT, a community Jewish high school.