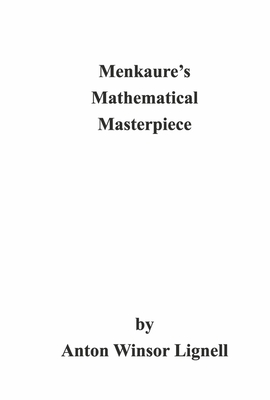 
Not On Our Shelves—Ships in 1-5 Days
The sum of the widths of the thirty ornaments carved in to the walls of the ante chamber of Menkaure's pyramid equals the height of the pyramids entrance, and forty times that sum equals the in-and-out round trip length of the complete passage system. The measurements of all the lengths, widths, and heights of the chambers and passageways relate by square roots, squares, inverses, multiples, and divisions to one number, 36277.73439 inches.

This number is only 0.137 of an inch less that the 36277.872 inches that are the sum of the four different sides of the Great Pyramid as measured by the surveyor J.H. Cole for the Egyptian government in 1925, which is also the measure of the ancient half-minute of Equatorial latitude.

In addition, the the granite-lined third chamber is a hymn to the geometric constant 2.598076213 (the square root of 6.75) for determining the area of a hexagon, with the arch of its vaulted ceiling measuring the same number of inches as the descending passage from the entrance down to the base level.

The full measure of the Equatorial degree of latitude according to Menkaure's pyramid would be 68.7083028 miles, 18.3262 inches less than the official ancient Egyptian measure, a complicated system of adding specific amounts of cubits to compensate for the bulge in the Earths equator, it's half minute number of 36277.73439 inches, being a vastly superior in the realm of pure number.
Descended from two generations of architects, his grandfather being the first Finnish-American architect to design and build his designs in the U.S. and his father, who worked on the Jefferson Memorial and the National Gallery, Anton Windsor Lignell instead became as artist. Supporting himself first as a tree surgeon in the ancient trees of J.P. Morgan and other robber barons on the north shore of Long Island where he grew up. Then, after a few years working in the Harvard Library and the Boston Public Library, he served a 5 year apprenticeship making harpsichords in Boston and moved to Berkeley, where he became the first early keyboard instrument maker on the West Coast designing and building 22 harpsichords, a clavichord, a virginals, and two spinettinos. In the middle of this he started carving rocking horses and teaching classes in carving rocking horses and carousel horses in his shop and later at the University of California Berkeley, the University of Maine Machias, the Haystack School of Crafts, and the Mendocino School of Arts and Crafts. During this time he also completed more than 5,000 paintings and drawings. The forty years since have been a total absorption in the mathematics of the great pyramids of Giza.