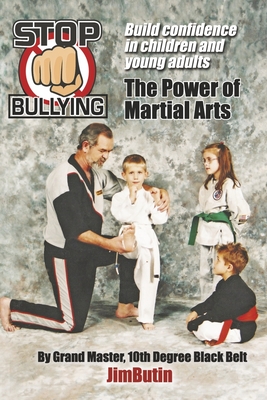 
Not On Our Shelves—Ships in 1-5 Days
Not every child will become a black belt in proficiency, but all children can benefit from the skills, character development and confidence that are offered in the martial arts. The purpose of this book is to educate parents, school administrators and couselors about the importance of Martial Art training to handle the problem of bullying. It is not all about learning to fight and defend yourself, but how to defuse a situation with confidense, but know how to fight if need be.
This is the book that every parent considering martial arts education must read! This is Grand Master 10th degree black belt Jim Butin. After 47 years operating a highly successful Martial Arts school, I learned many things about motivating parents to want to take the step to enroll their children in this valuable training.
The statement I heard the most is... "My child is being bullied at school, and I want him/her to learn how to defend themselves."
I developed this "Stop Bullying book" book based on those years of working with children as a guidebook on how to stop bullying by building confidence in children and young adults through the power of Martial Arts.
It goes way beyond teaching them how to defend themselves. That is an important consideration if it escalates to that point. More important is to give the the confidence to diffuse the situation before it escalates to that point. I took great pride in working with all kids o have a great attitude and develop responsibility and respect for others.
There are benefits to martial art training for everyone, even if they never use their martial art skills in a self-defense situation.
Many parents have contacted my long after all their kids have finished their pursuit of belt advancement and personal successes in the Martial Arts, to inform me how valuable they believe the martial arts had been in the maturation of their children.

Jim Butin is recognized as a tenth degree Black Belt by both the World Martial Arts Ranking Association and the American Karate Black Belt Association.
He owns and operates National Karate and Tae Kwon Do, in Oklahoma City.
Jim started his Tae Kwon Do training in Fort Worth, Texas in November of 1965 at the age of 16 under Pat Burleson. Master Burleson's lineage comes from his association with Allen Steen from Dallas and Jhoon Rhee, who is considered to be the "Father of American Tae Kwon Do."
After making Black Belt in June of 1968, Jim competed in and won every major tournament that was prevalent in the Texas, Oklahoma, and Kansas area. He has won over 150 awards, all in fighting divisions. He won four National titles, and was rated as the #2 light heavy weight in the world by the PKA from 1974 to 1978. He was inducted into Official Karate's "Legion of Honor" and he is listed in four Martial Arts Halls of Fame including an inaugural induction to the Tae Kwon Do Hall of Fame, and can be found in the "Who's Who of Martial Arts".
Besides competing and winning the silver medal in the first World TKD Championships in Seoul, Korea in 1973, Jim also competed in Europe in 1974 with another famous U.S. team, which included Joe Lewis, Jeff Smith, Howard Jackson and Bill Wallace, against Germany, and the Netherlands. The team was undefeated in six separate contests. Jim is also a history general for the Sport Karate Museum.
When Jim walked away, he felt like he could benefit the sport by opening a Karate school. He worked hard and shared his knowledge and techniques with hundreds of talented students. Jim ran that very successful and profitable school for 47 years. He felt like he owed it to other schools, whether established or new, to share his experiences as both a competitor and a school owner.
As the Director of the World Martial Arts Ranking Association. (WMARA) I am honored to offer the most credible program for testing for higher rank Black Belts.