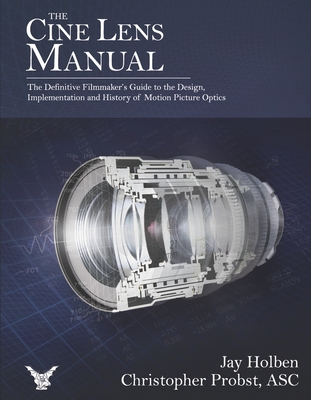 
Backordered
It is the camera that separates cinema from other art forms and the lens that allows a scene to be captured by the camera. The cinema lens, therefore, is at the heart of filmmaking. All aspects of a production are carefully crafted with the intention of being captured by the lens and camera to create a visual story. The Cine Lens Manual is a comprehensive examination of the art and science of cinema optics. Written in clear, easily-digestible language, and extensively illustrated, The Cine Lens Manual is designed for readers of all levels of experience from novice to expert. With more than 60-years of experience between them as cinematographers, technical journalists and educators, authors Holben and Probst break down the most complex concepts into easy-to-understand ideas, without requiring a mastery of calculus or physics.

This manual is not just for cinematographers, but for all individuals with an interest in the lens — directors, visual effects artists, camera assistants, animators, technical journalists, historians, students, rental house technicians — anyone looking for a deeper understanding of cinema optics. It is unlike anything else that has ever been written on the subject.

The chapters explore:
•A primer on cinema lenses
•Introduction to optical design
•Investigation of advanced optical design and early photographic lenses
•Examination of optomechanical design
•Evolution of motion picture formats
•History and genealogy of 140 years of purpose-built cinema lenses,
detailing more than 300 series
•Modifying existing lenses for use in cinema or to creatively custom-tune
their performance
•Testing and evaluating lenses
•Care and maintenance of cinema lenses

The Cine Lens Manual is a journey through the world of cinema lenses investigating every possible aspect from the formation of glass itself into today's top cinematographic optical tools. It is a must-read for all visual storytellers working in the cinematographic world.
Jay Holben is an independent director and producer in Los Angeles. A former ("recovering") cinematographer, he is an associate member of the American Society of Cinematographers, the chair of the ASC's Motion Imaging Technology Council's Lens Committee, and a technical contributing editor for American Cinematographer magazine. He is an international lecturer on the art and science of filmmaking and serves as a faculty instructor for the Global Cinematography Institute, a school started by the late Academy Award winning cinematographer, Vilmos Zsigmond, ASC. He is the author of two previous books on cinematography: A Shot in the Dark: A Creative DIY Guide to Cinematic Lighting on (Almost) No Budget and Behind the Lens: Dispatches from the Cinematographic Trenches. Christopher Probst, ASC is a working cinematographer and an active member of the American Society of Cinematographers. He is also a self-professed lens junkie and an all-things technical geek. He served as the technical editor of American Cinematographer magazine for over 20 years and has taught/lectured about cinematography for the ASC's Masterclass, the Camerimage festival and the Global Cinematography Institute.
Best known for his ASC-Award nominated work on director David Fincher's Netflix series Mindhunter, his extensive body of work in music videos spans hundreds of clips for artists such as Ariana Grande, Taylor Swift, Eminem, Billie Eilish, Shakira, Lana Del Rey, Kelly Clarkson, Black Eyed Peas, Katy Perry, Pussycat Dolls, Jay-Z and Muse. (In this arena alone, his work has amassed more than 35 billion views on YouTube.) He has also shot thousands of commercial ads for clients such as Apple, Samsung, FOX Sports, Turkish Airlines, LG, Johnnie Walker, Adidas, Lexus, Mercedes, Infiniti, BMW, and Ford. Probst is also well-versed in narrative and has photographed the feature films Detention for Sony Pictures, Fire With Fire, and the sci-fi actioner, Beyond Skyline.