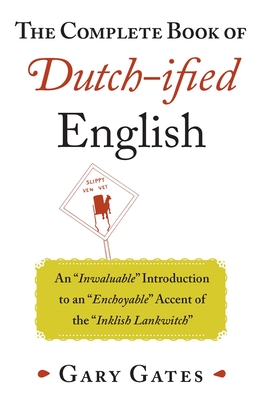 Learn the meaning of “rutch” and “spritz,” what a “clod” and a “crotch” are, how to pronounce and make “Cussin Rache’s Snitz and Knepp,” and what has happened to food when it’s “all.” Spice up your vocabulary with delightful words and phrases, such as:

• Grex: To complain, moan. “Ah, quit your grexing, you have a vonderful life.”
• Face: Belief, religious conwiction. “Praise be! Rebecca has found her face in the Lord again!”
• Gruntbecky: An expression of hard going. “Gruntbecky! It’s difficult to run in this hot sun.”
• Nix nootz: A devilish, mischievous person. “Our daughter is a little nix nootz.”
• Rupdawn: A massage. “A good rupdawn will take the ache away.”

Tired of trying to conform to traditional speech patterns, Gary offers a warm and funny celebration of the unique Dutch culture in America.
Gary Gates is a Dutchman from Lebanon County, Pennsylvania, where all the baloney comes from. People know where he is from when he opens his mouth.

Gary is a performer, having appeared hundreds of times at festivals, fairs, colleges, libraries, corporation banquets, comedy clubs, writers groups, resorts, and on radio and TV. His Pennsylvania Dutch humor is riotous fun, sweet enough for family entertainment, yet salty enough to keep adults and children in stitches.

He loves performing and celebrating his unique heritage with his fellow Dutchmen, and sharing it with non-Dutchmen, whose response to his show has been overwhelmingly hysterical. Some people have declared him the new Professor Schnitzel, even the Mark Twain of Pennsylvania Dutch country. Even more people simply call him the best windbag they ever heard.