Rahel Varnhagen: The Life of a Jewish Woman (Paperback) 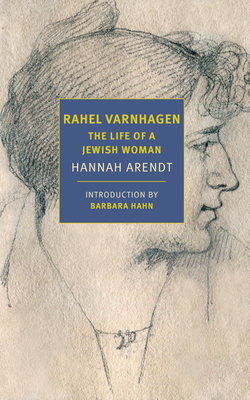 Rahel Varnhagen: The Life of a Jewish Woman (Paperback)


In Stock—Click for Locations
A biography of a Jewish woman, a writer who hosted a literary and political salon in late eighteenth- and early nineteenth-century Germany, written by one of the twentieth century's most prominent intellectuals, Hannah Arendt.

Rahel Varnhagen: The Life of a Jewish Woman was Hannah Arendt’s first book, largely completed when she went into exile from Germany in 1933, though not published until the 1950s. It is the biography of a remarkable, complicated, passionate woman, and an important figure in German romanticism. Rahel Varnhagen also bore the burdens of being an unusual woman in a man’s world and an assimilated Jew in Germany.

She was, Arendt writes, “neither beautiful nor attractive . . . and possessed no talents with which to employ her extraordinary intelligence and passionate originality.” Arendt sets out to tell the story of Rahel’s life as Rahel might have told it and, in doing so, to reveal the way in which assimilation defined one person’s destiny. On her deathbed Rahel is reported to have said, “The thing which all my life seemed to me the greatest shame, which was the misery and misfortune of my life—having been born a Jewess—this I should on no account now wish to have missed.” Only because she had remained both a Jew and a pariah, Arendt observes, “did she find a place in the history of European humanity.”
Hannah Arendt (1907–1975) was a German-born American political scientist and philosopher. She was forced to leave Germany in 1933, after which she lived in Paris for eight years working for Jewish refugee organizations before immigrating to the United States in 1941. Her most famous philosophical works are The Origins of Totalitarianism and The Human Condition.

Barbara Hahn is a professor emerita of German studies at Vanderbilt University. She has written and edited a number of books in German, collecting and commenting on Hannah Arendt’s work and the life and correspondence of Rahel Varnhagen.
"Arendt probes so deeply into her subject's inner life, and writes so vividly about her frustrations and sorrows, that the biography often reads like a novel. . . . an imaginative mix of biography and social commentary that still feels, as the scholar Barbara Hahn writes in her introduction, thoroughly 'ahead of its time.'" —Lily Meyer, NPR

"In recounting Varnhagen’s life, Arendt documents the paradoxes of German Jews’ emancipation between the breakdown of the Jewish ghetto in the eighteenth century and the emergence of the nineteenth-century bourgeois Christian nation-state. . . . What interested her was the evolution of Varnhagen’s psychology and, especially, her Jewish identity." —Seyla Benhabib, New York Review of Books

“Reading Rahel Varnhagen today, I am startled to see that it is neither Jewishness nor womanness that holds my attention. What is striking now are the extraordinary similarities between Rahel’s period and our own. . . . Seen against the disturbed and disturbing climate of a time, then as now, in which profound questions of self and world are being asked, Rahel’s double portion of outsiderness cannot help but sound a deep note in the responsive reader.” —Vivian Gornick, The Nation

“Arendt’s insight into the psychology and the situation of pariah and parvenu is essential.” —Kirkus Reviews

“If you know about Rahel Varnhagen, it’s probably because of Hannah Arendt.” —Talya Zax, Forward