Mental Floss The Curious Viewer: A Miscellany of Bingeable Streaming TV Shows from the Past Twenty Years (Hardcover) 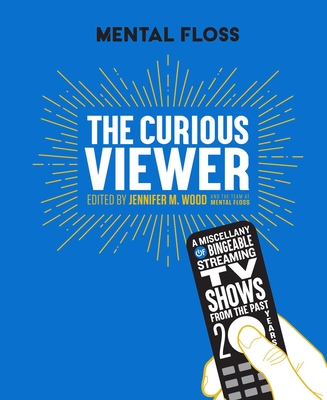 Mental Floss The Curious Viewer: A Miscellany of Bingeable Streaming TV Shows from the Past Twenty Years (Hardcover)

By Jennifer M. Wood, The Team at Mental Floss


Not On Our Shelves—Ships in 1-5 Days
Need a new show to binge? Want to learn behind-the-scenes insights about your favorite series? Then Mental Floss: The Curious Viewer is for you!

From Mental Floss, the premier online destination for curious minds, comes a deep dive into the greatest television shows from the last 20 years. Filled with little-known facts and lists of must-see shows, this fascinating collection includes:

Mental Floss: The Curious Viewer also contains many of Mental Floss’s famously fascinating lists, such as Actors Who Asked for Their Characters to Be Killed Off, The Most-Watched TV Series Finales Ever, TV Characters Who Were Inspired by Real People, Bizarre TV Crossovers, Amazing One-Season Shows, Important Moments in LGBTQ+ History on TV, and Unforgettable Television Cliff-Hangers.
Jennifer M. Wood is the managing editor of Mental Floss and oversees the site's entertainment and pop culture content. Her writing has appeared in various publications, including WIRED, Condé Nast Traveler, Vulture, GQ, Rolling Stone, Vanity Fair, and The New York Times.
"This is the ultimate bingeing guide."

"Bingers, beware! This is a must-read, factoid-filled miscellany of the most watchable shows of the past 20 years. If you know a TV expert, now you can make them, well, a TV insider."
— TV Insider

“The Curious Viewer unearths everything you ever wanted to know about beloved shows. Jennifer M. Wood shares facts and behind-the-scenes gossip from each show but somehow doesn’t make you feel like you’ve already read them all in a Buzzfeed article."
— BookPage

An incredible gift for a bookish pop culture lover....whoever gets their hands on this will burn through it and become the most amazing television historian in no time.
— The Inventory