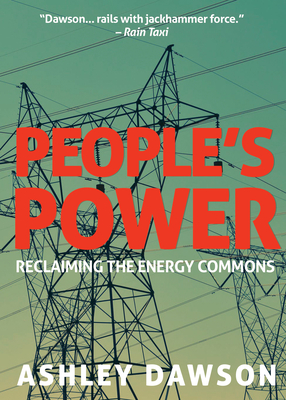 The science is conclusive: to avoid irreversible climate collapse, the burning of all fossil fuels will have to end in the next decade. In this concise and highly readable intervention, Ashley Dawson sets out what is required to make this momentous shift: simply replacing coal-fired power plants with for-profit solar energy farms will only maintain the toxic illusion that it is possible to sustain relentlessly expanding energy consumption. We can no longer think of energy as a commodity. Instead we must see it as part of the global commons, a vital element in the great stock of air, water, plants, and cultural forms like language and art that are the inheritance of humanity as a whole.

People's Power provides a persuasive critique of a market-led transition to renewable energy. It surveys the early development of the electric grid in the United States, telling the story of battles for public control over power during the Great Depression. This history frames accounts of contemporary campaigns, in both the United States and Europe, that eschew market fundamentalism and sclerotic state power in favor of energy that is green, democratically managed and equitably shared.

Ashley Dawson is a professor of English at CUNY, New York City. He is the author of Mongrel Nation and The Routledge Concise History of Twentieth-Century British Literature, as well as a short story in the anthology Staten Island Noir.