Minuteman: A Technical History of the Missile That Defined American Nuclear Warfare (Hardcover) 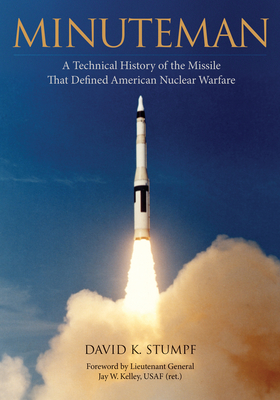 Minuteman: A Technical History of the Missile That Defined American Nuclear Warfare (Hardcover)


In Stock—Click for Locations
In Minuteman: A Technical History of the Missile That Defined American Nuclear Warfare, David K. Stumpf demystifies the intercontinental ballistic missile program that was conceived at the end of the Eisenhower administration as a key component of the US nuclear strategy of massive retaliation. Although its nuclear warhead may have lacked power relative to that of the Titan II, the Minuteman more than made up for this in terms of numbers and readiness to launch—making it the ultimate ICBM.

Minuteman offers a fascinating look at the technological breakthroughs necessary to field this weapon system that has served as a powerful component of the strategic nuclear triad for more than half a century. With exacting detail, Stumpf examines the construction of launch and launch control facilities; innovations in solid propellant, lightweight inertial guidance systems, and lightweight reentry vehicle development; and key flight tests and operational flight programs—all while situating the Minuteman program in the context of world events. In doing so, the author reveals how the historic missile has adapted to changing defense strategies—from counterforce to mutually assured destruction to sufficiency.

David K. Stumpf is a retired research scientist at the University of Arizona and the author of Titan II: A History of a Cold War Missile Program, Regulus: The Forgotten Weapon, and Growler and Grayback: Two of a Kind.

“Minuteman is an exceptionally important contribution to the historiography of air power and the strategic triad . . . a most valuable study and a good story, well told.”

—Roger D. Launius, author of Reaching for the Moon: A Short History of the Space Race

“An important addition to the literature on the history of US strategic missiles, Minuteman will be of interest to libraries, educational institutions, engineers, and historians interested in missiles, nuclear weapons, and the Cold War.”

"The Minuteman was one of the most important weapons of the nuclear age, and the subject of countless arguments and debates in the White House, the Pentagon, and Congress during the Cold War. David K. Stumpf's comprehensive and engaging history explores all aspects of this weapons system, from its creation and testing to deployment to its partial elimination during arms-control discussions. Even today, buried throughout the American Midwest, hundreds of Minuteman missiles with horrible destructive power sit at the ready, hopefully to never be used."

“From the scientific research that made possible the engineering and development of the Minuteman, to the challenging construction of operational facilities across the central United States, David K. Stumpf narrates this technical history with masterful precision. Every turned page reveals long-neglected or surprisingly new details from now-obscure sources.”

“Minuteman is a timely and valuable contribution in view of the ongoing deliberations on a decades-long upgrading of Minuteman III.”
—Leonard H. Caveny, former director of science and technology, Ballistic Missile Defense Organization

“Minuteman is the first comprehensive account of this vitally important strategic missile. All individuals interested in the details of the complex Minuteman development, deployment, and testing history will want to purchase this book. Even those who are extremely knowledgeable about Minuteman can learn a great deal from David K. Stumpf’s account.”
—J. D. Hunley, author of The Development of Propulsion Technology for US Space-Launch Vehicles, 1926—1991