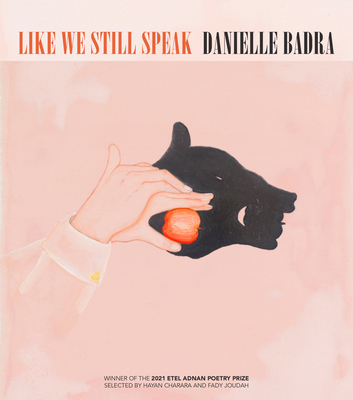 Conversation and memory are at the heart of Danielle Badra’s Like We Still Speak, winner of the 2021 Etel Adnan Poetry Prize. In her elegiac and formally inventive debut, Badra carries on talking with the sister and father she has lost, often setting her words alongside theirs and others’ in polyphonic poems that can be read in multiple directions. Badra invites the reader to engage in this communal space where she investigates inheritance, witnessing, intimacy, and survival.

“This is a deeply spiritual book, all the more so because of its clarity and humility. Yet, we cannot walk away from the addictive command that so many of these poems ask us to follow: to read them along plural paths whose order changes while their immeasurable spirit remains unbound. Each poem is a singular vessel—of narratives, embodiments that correspond with memories, memories that recollect passion. . . . Like We Still Speak is a sanctum. Inside it, we are enthralled by beauty, consoled by light, sustained by making.”
—Fady Joudah and Hayan Charara, from the Preface

Danielle Badra is a queer Arab American poet who was raised in Michigan and currently resides in Virginia, where she received an MFA from George Mason University. Like We Still Speak is her first full-length collection.

“Danielle Badra’s Like We Still Speak is both pristine and audacious—pristine in its acute responsiveness to the subjects at hand—profound loss, staggering grief, and overarching love—and audacious in its courage to ‘still speak’ in contrapuntal braiding with the voices of the dead. These poems reveal a dynamic collaboration with the living and the dead, in English, in Arabic, with other writers, visual artists, parents, friends, and most potently, the poet’s sister Rachal, who compels Badra’s exquisite formal innovations. Her grand achievement: to have built poems on the foundation of sustained love, both cultural and intimate, and to have centered her poetics in dialogues that enact an inclusiveness, an elegant defiance, beyond anything I have read.
—Diane Seuss, author of frank: sonnets and Still Life with Two Dead Peacocks and a Girl

“In this dreamlike and haunted debut, Danielle Badra fulfills what Allen Grossman considers poetry’s highest calling—to resist the disappearance of the beloved. Badra remembers and dialogues with her deceased sister Rachal and her own poetic lines in this testament to the persistence of spirit—a kind of resurrection poetics in which loss and life, onion and honey, sister and self commingle on the tongue. ‘The world opens up to you / between gypsum and jasmine. [. . .] Your body is a fugitive of always.’”
—Philip Metres, author of Shrapnel Maps and Sand Opera

“In these beautiful, carefully crafted poems of love and loss, Danielle Badra mourns and speaks with the dead. There’s a sense of being halved, reflected visually on the page in her diptychs, which interweave her late sister’s words with hers. There’s also, simultaneously, a sense of connection in that very act of intertwining words. A collection about life and death, not as dichotomy, but as painful conversation, in which grief is as inevitable as small delights.”
—Zeina Hashem Beck, author of Louder than Hearts

“Perhaps all true elegies are written as though the dead were somehow just out of earshot and alive to answer. Certainly, Danielle Badra insists on still listening to her sister. By incorporating her sister’s poems into her own, Badra embodies a loss that lives on as half her voice. Across the gap between the living and the dead these powerful poems pass, fragmentary intimacies that through quotation and repetition accrue into shared ritual and healing song. Out of family, memory, and poetry a new, collaborative self emerges, and new love flares full of its true luminosity and danger. ‘Incandescent, / a star is both light and bomb.’”
—Brian Teare, author of Doomstead Days