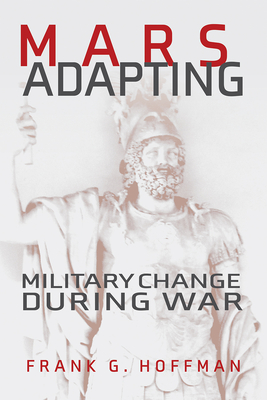 
Not On Our Shelves—Ships in 1-5 Days
As Clausewitz observed, In war more than anywhere else, things do not turn out as we expect. The essence of war is a competitive reciprocal relationship with an adversary. Commanders and institutional leaders must recognize shortfalls and resolve gaps rapidly in the middle of the fog of war. The side that reacts best (and absorbs faster) increases its chances of winning. Mars Adapting examines what makes some military organizations better at this contest than others. It explores the institutional characteristics or attributes at play in learning quickly. Adaptation requires a dynamic process of acquiring knowledge, the utilization of that knowledge to alter a unit's skills, and the sharing of that learning to other units to integrate and institutionalize better operational practice. Mars Adapting explores the internal institutional factors that promote and enable military adaptation. It employs four cases, drawing upon one from each of the U.S. armed services. Each case was an extensive campaign, with several cycles of action/counteraction. In each case, the military institution entered the war with an existing mental model of the war they expected to fight. For example, the U.S. Navy prepared for decades to defeat the Japanese Imperial Navy and had developed carried-based aviation. Other capabilities, particularly the Fleet submarine, were applied as a major adaptation. The author establishes a theory called Organizational Learning Capacity that captures the transition of experience and knowledge from individuals into larger and higher levels of each military service through four major steps. The learning/change cycle is influenced, he argues, by four institutional attributes (leadership, organizational culture, learning mechanisms, and dissemination mechanisms). The dynamic interplay of these institutional enablers shaped their ability to perceive and change appropriately.
Frank Hoffman holds an appointment as a distinguished research fellow at the National Defense University in Washington, DC. He is a retired U.S. Marine infantry officer. His forty-two years in the U.S. defense establishment includes senior political appointments at the Pentagon, ten years at Headquarters Marine Corps, and a decade at NDU's Institute for National Strategic Studies. In addition to his research portfolio in strategy and military innovation, he has taught at the National War College. He earned his PhD in war studies from King's College, London.