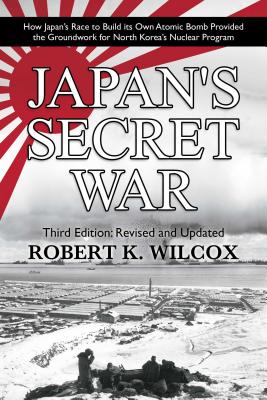 
Not On Our Shelves—Ships in 1-5 Days
How Japan’s World War II race to build an atomic bomb fathered North Korea’s nuclear threat.

This revised and greatly updated third edition of Japan’s Secret War is a groundbreaking, thoroughly sourced investigation into one of the least-known, yet highly significant episodes of World War II: Japan’s frantic race to develop its own atomic bomb. We’ll discover how that effort then evolved into North Korea’s nuclear program and the looming threat it presents to mankind.

Japan’s WWII development of a nuclear program is not universally known. After decades of research into national intelligence archives both in the US and abroad, Robert Wilcox builds on his earlier accounts and provides the most detailed account available of the creation of Japan’s version of our own Manhattan Project—from the project’s inception before America’s entry into WWII, to the possible detonation of a nuclear device in 1945 in present-day North Korea. Wilcox weaves a fascinating portrait of the secret giant industrial complex in northern Korea where Japan’s atomic research and testing culminated. And it is there that North Korea, following the Japanese defeat, salvaged what remained of the complex and fashioned its own nuclear program. This program puts not only Japan, but also its allies, including the US, in jeopardy.
Robert K. Wilcox is an award-winning author, journalist, historian, novelist, and screenwriter. He has authored thousands of published articles, many produced screenplays, and twelve published books—many of them translated into foreign editions. He lives in Los Angeles.
"Japan's Secret War is still spellbinding. It is intriguing and disturbing...Robert Wilcox deserves high praise for his meticulous research."
— Historynet.com

"One of the last secrets to come out of World War II."
— Stanley Sandler, author of "World War II in the Pacific: An Encyclopedia"

"Robert Wilcox has documented the final answer to those who might suggest that the US had some racist motive to drop two atomic bombs on Japan. They, in fact, planned to drop one on us!...My hat is off to Robert for this outstanding book. REQUIRED READING IF YOU WANT THE TRUTH."
— Robert A. Clark, President, International Association of Military Technology Historians