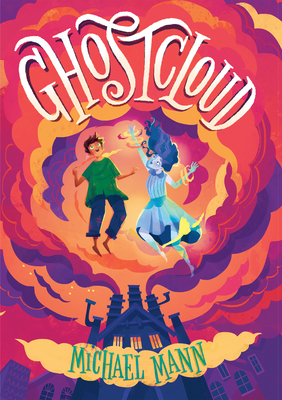 
On Our Shelves Now at:
A riveting, magical escapade about finding friendship and the courage to set yourself free against all odds.

Kidnapped and forced to shovel coal underground, in a half-bombed power station, 12-year-old Luke Smith-Sharma keeps his head down and hopes he can earn his freedom from the evil Tabitha Margate. Then one day he discovers he can see things that others can’t. Ghostly things. A ghostly girl named Alma, who can bend the shape of clouds to her will and rides them through the night sky.

With Alma’s help, Luke discovers his own innate powers and uncovers the terrible truth of why Tabatha is kidnapping children and forcing them to shovel coal. Desperate to escape, Luke teams up with Alma, his best friend Ravi, and new girl Jess. Can Luke and his friends get away before they each become victims to a cruel and sinister scheme?

Debut author Michael Mann delivers a wildly imaginative middle grade fantasy set in a smoke-stained world that’s sure to entertain readers who are eager for an adventure with paranormal superpowers.
Michael Mann is a primary school teacher by day and mostly writes when he should be sleeping at night. He was a winner of SCBWI’s Undiscovered Voices 2020, and the 2019 London Writer’s Award (Spread the Word). As a person of British and Indian heritage, he is passionate about diversity in children’s literature. He’s a fan of board games, reading, cloud spotting, and outdoor swimming. Ghost Cloud is his debut children's novel. Follow him on Twitter @mikebmann.

★ "Charles Dickens, Philip Pullman's His Dark Materials, and Neil Gaiman's The Graveyard Book rolled into one. Mann creates empathy for Luke, who shows clear hope and compassion for others during this evil time. The quick-witted humor and fast pace keep the entertainment factor high. Thrilling."—Kirkus Reviews, Starred Review

"The Dickensian hardships endured by the protagonists of this mystery-adventure will appeal to young readers . . . so, too, will the characters’ resourcefulness as they follow the clues and form alliances to combat the evil they uncover. The mild supernatural elements integrate smoothly into the alternate setting, while the idea of 'halves' (Luke is 'Half-Indian. Half-detective. Half-ghost') adds a somewhat wistful theme of identity to the rollicking action."—The Horn Book

"A fun first novel in the vein of Obert Skye and Brian Farrey."—Booklist