Crazy Horse Weeps: The Challenge of Being Lakota in White America (Paperback) 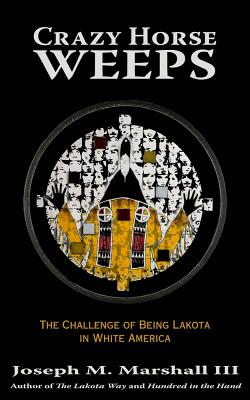 Crazy Horse Weeps: The Challenge of Being Lakota in White America (Paperback)


Not On Our Shelves—Ships in 1-5 Days
For Lakota, Dakota, and Nakota people, historical trauma, chronically underfunded federal programs, and broken promises on the part of the US government have resulted in gaping health, educational, and economic disparities compared to the general population. Crazy Horse Weeps, offers a thorough historical overview of how South Dakota reservations have wound up in these tragic circumstances, showing how discrimination, a disorganized tribal government, and a devastating dissolution of Lakota culture by the US government have transformed the landscape of Native life. Yet these extraordinary challenges, Marshall argues, can be overcome. Focusing on issues of identity and authenticity, he uses his extensive experience in traditional Lakota wisdom to propose a return to traditional tribal values and to outline a plan for a hopeful future.
Joseph M. Marshall III was born and raised on the Rosebud Sioux Reservation and holds a PhD from the reservation university, which he helped to establish. The award-winning author of ten books, including Hundred in the Hand, The Lakota Way, and The Long Knives Are Crying, he has also contributed to various publications and written several screenplays. Marshall's work as a cultural and historical consultant can be seen and heard in the Turner Network Television and DreamWorks epic television miniseries Into the West.
"[The Journey of Crazy Horse] a vivid, haunting biography that acknowledges the author's boyhood hero worship but avoids hagiography." —Publishers Weekly

"Using his skills as a historian along with the oral histories Marshall collected from the children and grandchildren of contemporaries of Crazy Horse, he freshly characterizes the charismatic leader [in The Journey of Crazy Horse]." —Booklist

"The Lakota have a wisdom that transcends the ages, and Joseph Marshall delivers it with grace and power in [The Lakota Way]." —Marianne Williamson

"Wise words by an authentic representative of Lakota culture...[The Lakota Way] is an inspirational book of a high order." —Kirkus Reviews

“[Returning to the Lakota Way] is certain to become a classic in Native American literature as well as a guide for anyone who seeks larger spiritual truths. Marshall, a Sicangu elder, is well on his way to becoming an elder for all of America.” —Roger Welsch, author of Embracing Fry Bread: Confessions of a Wannabe

“In [Returning to the Lakota Way], Marshall eloquently delivers some hard truths in a soft package. His message for today's world: we will surely sink beneath the floodwaters of tomorrow if we do not embrace the wisdom of yesterday.” —Joseph Starita, author of I Am a Man: Chief Standing Bear’s Journey for Justice

“In [Returning to the Lakota Way, Marshall] reminds his readers that even in the overstimulated, overstressed 21st century, the greatest peace is to be found in simple, universal values and quiet contemplation.” —Kirk Ellis, writer/producer of TNT’s Into the West and HBO’s John Adams

“There are no new magical answers or solutions to life’s mysteries [Returning to the Lakota Way], but there are certainly powerful lessons that one can choose to embrace. When you read this book you will be motivated to rekindle the person you were when you began this journey.” —Judi M. Gaiashkibos, an enrolled member of the Ponca Tribe of Nebraska and the executive director of the Nebraska Commission on Indian Affairs